House of the Faun Historical Facts and Pictures

House of the Faun, an ancient, private residence situated in Pompeii, Italy, was one of the most important and richly decorated houses that reflect the dignified life of the people during the Roman republic period. Referred to as one of the largest Roman houses in Pompeii, the House of the Faun featured great artworks, most of which are now on display in the National Archeological Museum in Naples. House of the Faun

The construction of this impressive residence dates to the 2nd century BC when Pompeii was under the Samnite rule (200-80 BC). The house was renovated following the earthquake in 62 AD, which is evident from the eastern walls of the atrium. This reconstructed building could only be used as a residence until the devastating eruption of Mt Vesuvius in 79 AD. The house was named after the bronze figurine of the dancing faun situated on the impluvium.

Although the ownership of this historic house is unknown, the expensive decorations and mosaics excavated have proved that its inhabitants belonged to the aristocratic class. An inscription, discovered by archeologists, exhibited the cognomen Saturninus that suggests the dwelling was possibly owned by the Satrius Family. A ring with the name Cassius incised onto it was also found, which means that the Casii were related to the homeowners through marriage.

The House of Faun consists of the Alexander Mosaic, which represents the Battle of Issus fought between Darius III (Emperor of Persia) and Alexander the Great in 333 BC. This artwork was probably copied from a painting by the Philoxenus of Eretria. Even though opus signinum was the more common material used in constructing pavements of the second and first centuries BC, the famous Alexander the Great painting makes use of tessellation. Several other floor mosaics having theatrical masks and Nilotic scenes complement the Alexander mosaic. The fish mosaic and the Satyr and Nymph are some of the other well-known artistic works contained in the House of the Faun. 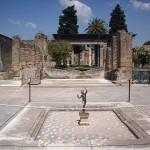 House of the Faun 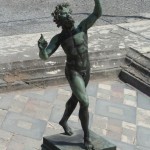 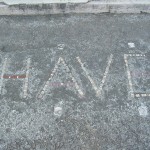 Have Mosaic House of the Faun 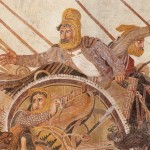 House of the Faun Alexander Mosaic 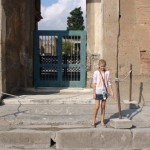 House of the Faun Entrance 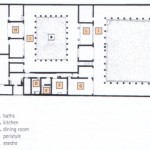 House of the Faun Floor Plan

House of the Faun Front View 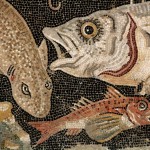 House of the Faun Mosaic Pictures 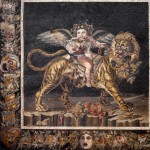 House of the Faun Mosaic 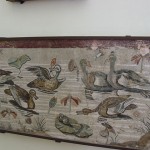 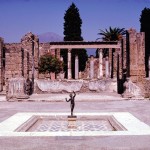 House of the Faun Pictures

The house, occupying an insula, is separated into five parts – the peristyle atrium, the Tuscan atrium, Ionic peristyle, Doric peristyle, and the service rooms with corridors. Like most Roman houses, this ancient residence also features storefront shops or tabernae as well as a modern building plan detailing many rooms. The house entrance exhibits a message “HAVE”, which is a Latin word used for greeting and salutation.

A private bath called balneum was installed by the house owners. The kitchen along with the bathroom was heated by a furnace while the living quarters of the servants were congested and dark without much furniture. Moreover, the house had an office (tablinum), a reception room (oecus), different dining rooms for the winter and summer, bedrooms (cubicula), and an entrance passage.