Santa Maria della Vittoria or Our Lady of Victory as it is known in English is a 17th century Roman Catholic Church located in Rome, Italy. It is a titular church dedicated to the Virgin Mary. The church lies very close to two other significant churches – Santa Susanna and San Bernardo alle Terme. It lies to the side of the Fontana dell’Acqua Felice. Designed by Carlo Maderno, the construction took place between 1608 and 1620. The church was initially dedicated to Saint Paul for the Discalced Carmelites – the order itself financed the project until the unearthing of the statue of Borghese Hermaphroditus during the excavations. Cardinal Scipione Borghese, the nephew of Pope Paul V, made a deal under which he decided to obtain the statue and in return agreed to pay for Giovanni Battista Soria’s work of the façade, which was completed in 1626. The church was rededicated to the Virgin Mary after the Catholic emerged victorious at the battle of White Mountain in 1620.

It consists of a single broad nave below a low segmental vault with three interconnecting side chapels, separated by gigantic corinthian pilasters with gilded capitals supporting an entablature.  White and gilded stucco angels and putti in full relief adorned the contrasting marble revetments.

After Maderno’s death, the interior was enriched in an orderly manner. Frescoes were added to the vault with winning themes enclosed in shaped compartments with counterfeit frames which include The Fall of the Rebel Angels and The Virgin Mary Triumphing over Heresy by Giovanni Domenico Cerrini in 1675.

Other works of sculpture include The Dream of Joseph by Domenico Guidi and Cardinal Berlinghiero Gessi’s funeral monument. The paintings also include the works of Nicolas Lorrain, Guercino, and Domenichino. The church houses the remains of Saint Victoria.

Mattia de’ Rossi decorated the cantoria on the counterfacade. 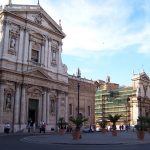 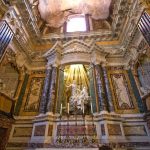 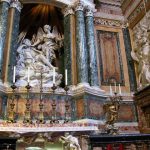 Inside of Santa Maria della Vittoria 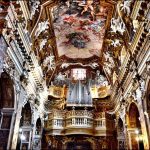 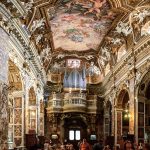 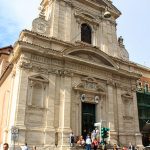 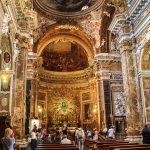 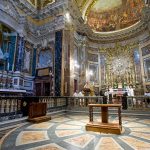 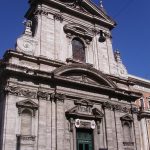 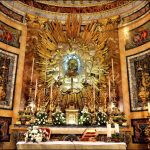 It is the last chapel on the left side of the church built on behalf of the cardinal Federigo Cornaro, comprising the Ecstasy of Saint Teresa – the masterpiece of Gian Lorenzo Bernini. The marble statue portrays a scene narrated by Saint Teresa of Avila in her memoirs where she had the vision of a seraph piercing her heart with a golden shaft.

In 1801, Pope Pius VII converted it into a titular church. Its first Cardinal Priest was Michelangelo Luchi (1801–1802).