Palazzo Vecchio (pronounced in Italian as “paˈlattso ˈvɛkkjo” meaning “Old Palace”), initially known as Palazzo della Signoria, is the civic center of the city of Florence in Italy. It is connected by an enclosed passageway, known as the Vasari Corridor with the Palazzo Pitti. The palace was called by several other names like Palazzo del Popolo, Palazzo dei Priori, and Palazzo Ducale in conformity with its usage during its long history. In 1299, the common people of Florence decided to build a palace that would be befitting to the city’s importance, and that will be more secure and defensible during periods of unrest. Architect Arnolfo di Cambio designed the original palace. Later additions were made in the 15th century by architect Michelozzo Michelozzi. The palace derived its present name with the shifting of the Medici duke’s residence to the Palazzo Pitti when Duke Cosimo I de’ Medici renamed his former palace.

The palace earned great significance as the hub of United Italy’s provisional government from 1865- 71. At that time Florence became the temporary capital of the Kingdom of Italy. Although most of the palace now serves as a museum, it was the seat of the local government as since 1872 the office of the mayor of Florence was located in the palace.

The cubical structure is built with solid rusticated stonework comprising two rows of two-lighted Gothic windows each having a trefoil arch. The building is capped with projecting battlement supported by small arches and corbels. Some of the arches can be put to use as embrasures for dropping hot liquids and rocks on invaders. The huge building is augmented by the tower with its clock.

The top of the front entrance door consists of an embellished marble frontispiece dating from 1528. The Monogram of Christ lies in the middle flanked by two gilded lions. A replaced statue of Michelangelo’s original David stands at the entrance flanked by Baccio Bandinelli’s Hercules and Cacus.

It was designed by Michelozzo in 1453 comprises of the crests of the church and city guilds. It also contains the porphyry fountain by Battista del Tadda. A copy of the original Putto with Dolphin statue by Andrea del Verrocchio is on display on the second floor. Numerous frescoes of Austrian cities painted by Giorgio Vasari in 1565 adorned the walls. Gilt stuccoes decorate the columns.

It contains the massive pillars to support the famous “Salone dei Cinquecento” on the second floor.

It houses many offices of the city.

Hall of the Five Hundred

This happens to be the most impressive chamber is 52 m long and 23 m broad. It was built by Simone del Pollaiolo in 1494 commissioned by Savonarola who became the spiritual leader of the Republic of Florence, replacing the Medici family after their exile, wished to make it a hub of the Grand Council comprising of five hundred members.  Later, the hall was expanded by Giorgio Vasari. The surviving decorations by Giorgio Vasari and his helpers mark the pinnacle of mannerism which transformed the hall into the showpiece of the palace.

The hall houses the Udienza or the raised stage built by Bartolommeo Bandinelli for Cosimo I to meet citizens and ambassadors. Michelangelo’s famous marble statue the “The Genius of Victory” lies in the central niche.

Studiolo of Francesco I

It is a small room without windows situated at the end of the hall. The room houses many masterpiece paintings, stucco and sculptures.

The Apartments of the Elements

The apartments comprise of five rooms were the private quarters of Cosimo I.

It has frescoes on the ceiling and provides a magnificent view of Florence.

The room houses a Madonna and Child and an ebony cabinet known as stipo. Also, the tapestries depict stories of Hercules.

Cosimo the Elder used to keep a menagerie of lions in an exclusive house in the palace. During big festivals, in front of dignitaries, he often fought them or pitted them against other animals.

The carved ceiling of this room, decorated with fleur-de-lys as well the statue of St. John the Baptist and Putti, are the works of Benedetto da Maiano and his brother Giuliano. Numerous frescos adorn the walls. A bas-relief of the Madonna and Child lies in the lunette above. 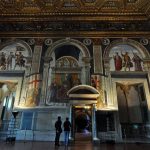 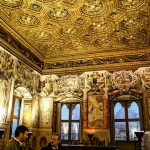 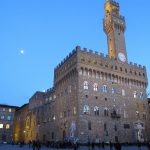 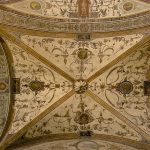 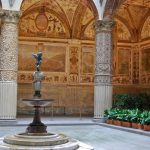 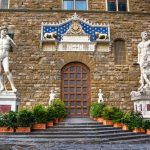 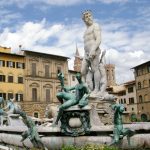 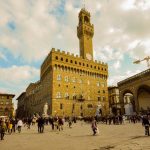 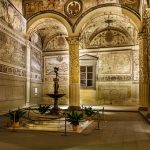 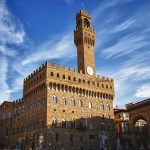 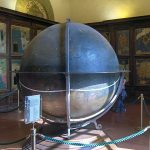 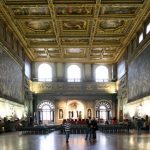 Hall of the Five Hundred 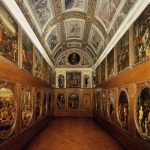 Studiolo of Francesco I 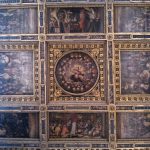 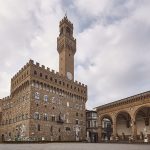 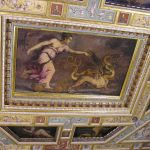 Apartments of the Elements

The Hall of Geographical Maps

It houses the precious belongings of the Medici Grand Dukes. The cabinets and carved ceilings are the work of Dionigi Nigetti.  Fifty-three astonishing maps of great scientific value beautify the doors of the cabinets . The maps possess immense historical significance, providing a good understanding of the geographical knowledge in the 16th century.

A large globe or mappa mundi lies in the center of the room.

This room was Machiavelli’s office when he became the secretary of the Republic houses his bust and portrait by Santi di Tito. It also contains the famous Winged Boy with a Dolphin by Verrocchio.

The area between the first and second floors houses the Renaissance and Medieval objects bequeathed by Charles Loeser, an American scholar, and expat collector. The area is the only part of the palace where the original 14th and 15th-century ceilings are still intact.