Boboli Garden is a famous 16th-century park located in Florence, Italy. The site houses numerous sculptures dating from the 16th to 18th centuries, along with fountains, century-old trees, and Roman antiquities. It is more than just a garden for it is one of the most renowned open-air museums in Florence. The park lies behind the famous Pitti Palace which was the main residence of the Medici family – the grand dukes of Tuscany who hired some of the most famous landscape gardeners of that time to build the gorgeous garden. The land was bought from the “Bogoli” family – the name from which the garden is thought to derive its name.

The original plan was drawn by Niccolò Tribolo, but the gardens were completed after his death in 1550 by other architects including Bartolomeo Ammanati, along with Giorgio Vasari (who is credited with laying of the grottos), and Bernardo Buontalenti (who was involved with sculpture and architecture of the grotto).

During the 17th, 18th and 19th centuries, contributions were made by the Medici and the Lorraine families to enrich and enlarge the garden.

The garden was devoid of a natural water source, but an intricate irrigation system was created by building a conduit from the nearby Arno River.

The amphitheater adorned with numerous niches, holding classical statues and urns, is located at the side of the hill behind the Pitti Palace. The center of the amphitheater contains the ancient Egyptian Boboli obelisk transported from Rome.

An artificial grotto lies to the left of the entrance of the park, known as the Grotto Grande, also referred to as Grotto del Buontalenti named after its designer. The grotto comprises of three connected chambers which house numerous sculptures. The first chamber contains the replicas of the statues of four slaves – unfinished work of Michelangelo created between 1521 and 1523. The second chamber houses the statue of ‘Paris and Helena’, created by Vincenzo de’ Rossi in 1560. The statue of the bathing Venus sculpted by Giambologna in 1565 lies in the third chamber. The niches of the grotto’s façade contain statues portraying Apollo and Ceres.

The Fountain of Neptune

Above the amphitheater, lies the fountain of Neptune. The structure comprises a large basin with a bronze statue of Neptune by Stoldo Lorenzi at the center. The fountain is also nicknamed the “Fountain of the Fork” as Neptune appears to be holding a large trident. Located on the top of the hill is the statue of Abundance.

The western part of the garden consists of a big avenue known as Viottolone flanked by statues and cypresses leading to the Isolotto – a small oval-shaped island containing the replica of the “The Fountain of the Ocean” created by Giambologna in 1576. Statues of Perseus and Andromeda occupy the surrounding moat. 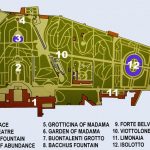 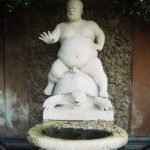 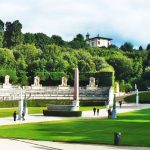 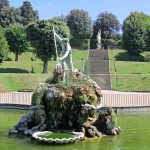 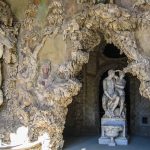 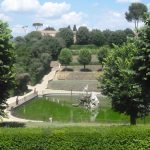 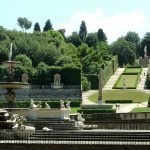 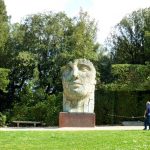 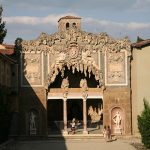 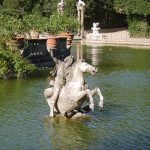 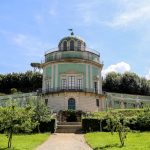 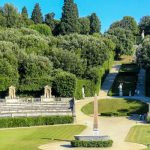 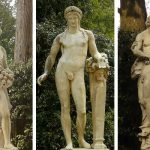 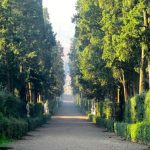 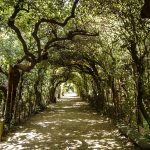 This singular fountain portrays Braccio di Bartolo, the court dwarf of Cosimo I de’ Medici, naked and drunk riding on a tortoise.

Built in 1775, the graceful pavilion in Rococo style is located north of the Grotto Grande near the terraced garden. At present, it serves as a coffee house.

It is a formal rose garden located on one of the terraces. The center of the garden contains a small sculpted fountain. The terrace is the ideal place to get a panoramic view of the surrounding area.