Castel di Sant’Angelo (known as Castle of the Holy Angel in English), also referred to as Mausoleum of Hadrian, is a famous historic structure located in Parco Adriano, Rome, Italy. Roman Emperor Hadrian ordered the construction of the edifice to serve the purpose of a mausoleum for himself and his family. The building was later used as a fortress and a castle by the popes. The structure was once the tallest building in Rome. The Tomb of Hadrian

Emperor Hadrian’s tomb also referred to as Hadrian’s mole was built between 134 and 139 AD on the right bank of the river Tiber. The mausoleum was originally a decorated cylinder with a garden top and golden quadriga. The Roman emperor Hadrian’s ashes were laid here after his death in 138 along with the ashes of his wife Sabina and his first adopted son Lucius Aelius who also died in 138. Subsequently, the remains of the succeeding emperors were also laid here; the last recorded was of Caracalla in 217. Emperor Hadrian is also credited to have built the Pons Aelius facing straight to the mausoleum famous for Baroque statues of angels.

Much of the contents of the tomb along with its decoration were lost since the building’s transformation into a fortress in 401 and following its inclusion in the Aurelian Walls by Flavius Augustus Honorius. During Alaric’s plundering of Rome in 410, the urns and ashes were dispersed by marauding Visigoths.

As per documentation, the original bronze and stone statues were thrown down upon the invading Goths when they attacked Rome in 537. A rare survivor was the capstone of a funerary urn probably that of Hadrian which is housed in the Saint Peter’s Basilica covering the tomb of Otto II and later included into a huge Renaissance baptistery.

The castle derived its present name from Archangel Michael who as per the legend appeared on the top of the building sheathing his sword as a sign to mark the end of the plague of 590. 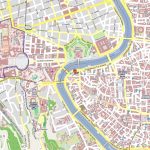 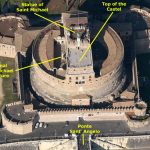 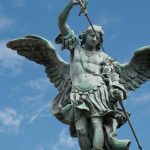 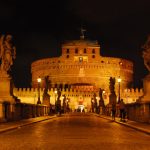 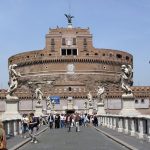 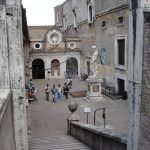 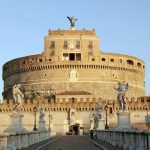 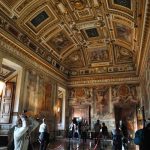 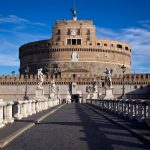 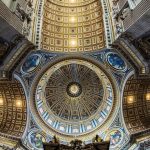 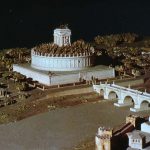 In the 14th century, the popes transformed the building into a castle and it was connected to St Peter’s Basilica by Pope Nicholas III by a covered fortified corridor known as the Passetto di Borgo. In 1527, Pope Clement VII took refuge in the fortress when Charles V’s mercenaries attacked Rome.

Under Pope Leo X, a chapel was built with a Madonna by Raffaello da Montelupo. The marble statue of Saint Michael at the top of the structure was also created by Montelupo. Later a rich apartment was built by pope Paul III to provide a safe place for the pope to stay during any future siege.

An Italian poet, philosopher, and mathematician Giordano Bruno, as well as an Italian sculptor and goldsmith Benvenuto Cellini, was imprisoned in the building. Execution of prisoners took place in the small inner courtyard.

The building was decommissioned in 1901 and it now serves as a museum.