Florence Cathedral, also known as “Cathedral of Saint Mary of the Flowers” and Cathedral of Santa Maria Del Fiore is the principal church of the city of Florence in Tuscany, Italy. Designed by Arnolfo di Cambio, the construction work began in 1296 and was finished in 1436. The cathedral is the fourth largest in the world, comprising the Baptistery and the Giotto’s bell tower, which is located in Piazza del Duomo. The Florence Cathedral was erected on the site of a smaller church dedicated to Saint Reparata. After Arnolfo’s death in 1310, the progress of the work was slowed down for thirty years. The Arte della Lana took patronage of the construction of the cathedral and appointed Giotto in 1334 to supervise the work. After the death of Giotto in 1337, Andrea Pisano continued the construction till 1348 when work ceased due to the Black Death.

Work resumed in 1349 under the supervision of Francesco Talenti, who completed the campanile and enlarged the whole project. Giovanni di Lapo Ghini succeeded Talenti in 1359 who separated the center nave in four square bays. Other architects involved were Alberto Arnoldi, Neri di Fioravante, Giovanni d’Ambrogio, and Andrea Orcagna. By 1375, the old church of Santa Reparata was demolished, and the nave was completed by 1380.

In 1418, an architectural design competition was announced by the Arte della Lana for building the Neri’s dome. Two master goldsmiths – Lorenzo Ghiberti and Filippo Brunelleschi were vying for the honor while the latter succeeded in getting the offer. Brunelleschi took charge of the project and in 1436 the dome was completed.

The decoration of the exterior of the cathedral started in the 14th-century and was completed by 1887.

The six side windows, noteworthy for their exquisite tracery and ornaments are divided by pilasters. Light enters only through the four windows closest to the transept while the other two are ornamental. The round clerestory windows reflect the typical Italian Gothic style.

The interior houses some famous paintings notably of Dante before the City of Florence by Domenico di Michelino. The interior also contains busts of Giotto, Brunelleschi, Marsilio Ficino, and Antonio Squarcialupi dating back to the 15th and 16th centuries.

On the top of the main door is the huge clock decorated with fresco portraits by Paolo Uccello.

The cathedral is notable for its 44 stained glass windows which depict saints from the Old and New Testament and Christ and Mary. The dome was painted with a representation of The Last Judgment by Giorgio Vasari and Federico Zuccari. 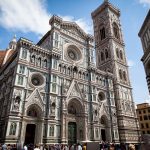 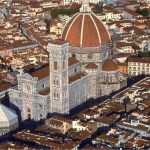 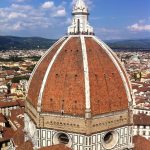 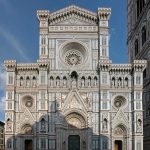 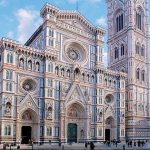 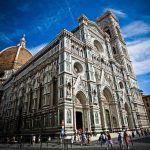 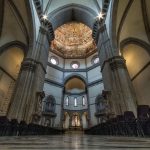 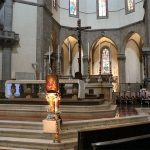 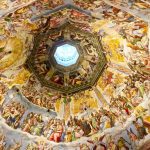 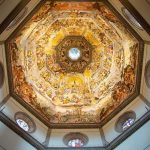 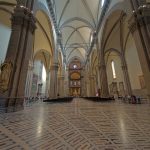 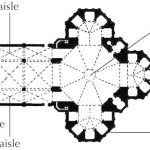 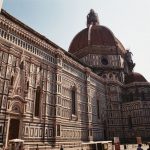 Arnolfo di Cambio designed the original façade which is attributed to Giotto. Many artists contributed to the so-called Giotto’s façade including Andrea Orcagna and Taddeo Gaddi. This façade was completed up to its lower portion and then left unfinished. In 1587-1588, the façade was dismantled by Bernardo Buontalenti, following orders by Grand Duke Francesco I de’ Medici.

A competition took place in 1864 and was won by Emilio De Fabris who started work on a new facade in 1876, completing its construction in 1887. The neo-gothic façade was made up of white, green and red marble and is dedicated to the mother of Christ.

At the start of the 15th-century, after one hundred years of construction, the cathedral was devoid of its dome. The construction of the dome was a long drawn process, and the ultimate credit goes to Filippo Brunelleschi.