The Temple of Athena is an ancient Greek temple located at Paestum in Italy. Built in c. 500 BC, the temple was thought to have been attributed to Ceres though recovery of several terracotta statuettes of Athena confirms that it is consecrated to this deity. It has a simpler structural design as compared to the Temples of Hera (the Basilica and the Temple of Neptune). The evidence for the foundation and construction of the Athena temple comes from the preserved architectural ruins and the style of carving on the column capitals. It seems that all the works were completed in a single building phase. Votive deposits were found at the temple containing figurines of Athena as Promachos (an armed warrior) and Kourotrophos (a goddess with kids). Such deposits from the Roman Period were also found at the site indicating the progression of the religious faction. During the 6th-7th centuries AD, this temple was converted into a church that was dedicated to the Virgin Mary. The southern walkway encircling the altar included some tombs of this era. 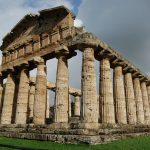 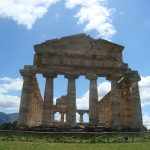 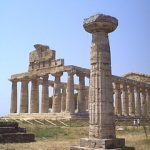 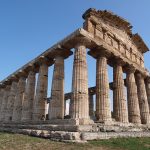 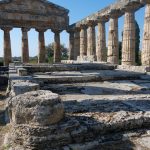 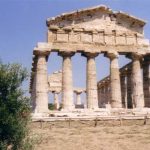 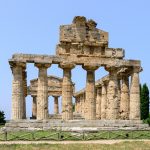 The architectural plan includes a series of external columns built in Doric style. Inside the colonnade, the temple has a wide pronaos and naos that contained eight columns built in Ionic style (4 at the front and 2 on each side), out of which two capitals and some bases remain. The cella building has neither an adyton nor opisthodomos and it is lined up with both the second and fifth frontal columns in the exterior. The east façade has an ambulatory with a depth of two intercolumniations while the other sides have a depth of only one intercolumniation. At the flanks and facades, the temple has equal interaxial spacing.