Herculaneum is an ancient Roman city in Italy that was devastated by the pyroclastic flows caused by the eruption of Mt Vesuvius in 79 AD. Surprisingly, this primeval town has retained its original splendor, and the ruins can now be viewed in the Ercolano community. Recent excavations have revealed wooden as well as organic-based objects including doors, beds, roofs, food, and skeletons. It is believed that Herculaneum was a wealthy town with an assortment of extraordinary houses decorated with colored marble. According to ancient myths, the city was named after Herakles (the Greek hero who was known as Hercules in Latin). This indicates that Herculaneum was probably of Greek origin. In the 6th century BC, some of the ancestors of the Samnites set up the first settlement in Herculaneum. Before long, the Greeks took control of the city, named it Heraklion, and used it for trading purposes. It was again under Samnite domination in the 4th century BC and remained so until 89 BC when it was established as a Roman municipium.

After the disastrous eruption of Vesuvius in AD 79, the ancient city was buried under 50-60 ft of ash. Even though more than 70% of the town is still buried and hidden, sporadic excavations including the 18th-century exploration by Prince d’Elbeuf have revealed streets, buildings, wells, and underground tunnels.

It is the first building found in Insula II. Although the house is not well preserved, the entrance that opens onto the atrium can be viewed.

This house was named after a painting of Argus and Io that was used for decorating a reception room situated at a distance from the large peristyle. Discovered in the 1820s, it was one of the finest houses in Herculaneum having a balcony on the second floor.

House of the Genius

Located to the north of House of Argus, the House of Genius was probably a spacious building that has the ruins of a rectangular basin in the middle of its peristyle.

House of the Alcove

This house comprises a combination of plain, simple rooms and some richly decorated ones. It has a covered atrium, which means it lacks the impluvium. The original flooring containing mosaics and artworks made by using opus sectile and opus tesselatum techniques are retained. It also features a biclinium that is decorated with frescoes and a large triclinium noted for its marble flooring. 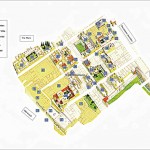 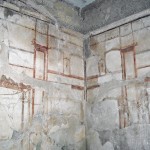 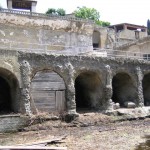 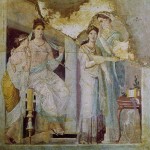 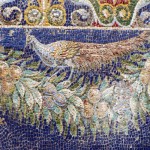 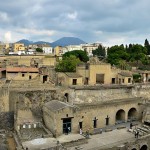 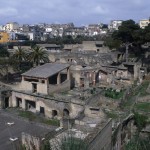 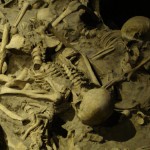 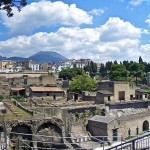 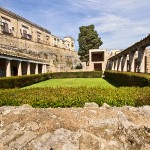 House of Argus Inside 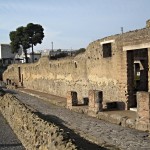 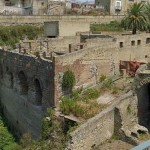 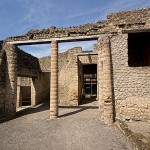 House of the Alcove 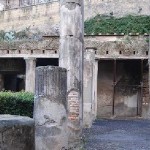 House of the Genius 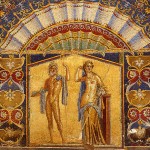 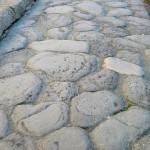 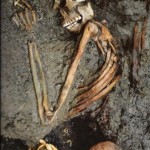 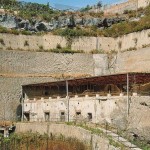 Villa of the Papyri

Villa of the Papyri

One of the most outstanding villas at Herculaneum, the Villa of Papyri was thought to be the seafront refuge for Lucius Calpurnius Piso Caesoninus, the father-in-law of Julius Caesar. During 1752-1754, some blackened papyrus scrolls were discovered by workers. The scrolls, also called the Herculaneum papyri, are now preserved at the National Library in Naples.

Explorations by Giuseppe Maggi in 1981 had revealed 55 skeletons including 12 children, 30 adult males, and 13 adult females on the beach as well as in the boat chambers. Moreover, archeological explorations in the 1990s unearthed more than 300 skeletons clustered together in 12 arches on the beach. A woman’s skeleton was named the “Ring Lady” since rings were found on her fingers.