The Arch of Trajan or the Trajan Arch, a triumphal arch, is one of the most prominent ancient Roman structures found in Benevento, Italy. This artistic feat from the 2nd century, constructed at the entrance of the city, is dedicated to Emperor Trajan. The victory Arch of Trajan was built during 114-117 CE over the Via Appia, commemorating the completion of Via Traiana that is an extension of the Via Appia. Moreover, it depicts the scenes of Trajan’s conquests and imperial divinity, as well as the programs of social works implemented by him. The arch was surrounded by the city walls during the Lombard rule and was known as the Golden Gate (Italian: Porta Aurea).

The Church of Sant’llario that houses the video museum of the Trajan Arch was constructed nearby. In the Renaissance period, the arch was thoroughly studied by the Italian architect and theoretician Gianmarco Serlio. A famous Italian artist, Giovanni Battista Piranesi drew the church in the 18th century. Because of aging and damages caused by earthquakes, the arch underwent several restorations in 1661, 1713, and 1792. During the visit of Pope Pius IX in Benevento, the arch was cut off with the demolition of annex structures and buildings.

The arch, measuring 15.6 m in height and 8.6 m in width, features a single, barrel-vaulted passageway. At each of the richly sculpted façades, there are four semicolumns conforming to the two side pillars and supporting a superstructure of bands and moldings that lie horizontally above the columns.

Built in limestone, the triumph arch is covered with slabs of Parian marble using opus quadratum technique. There is a dedicatory inscription on the attic while the base-relief panel on the left side depicted the homage of the countryside divinities and the right panel represented the removal of provincial colonies. 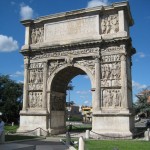 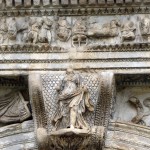 Arch of Trajan at Beneventum Keystone and Victories 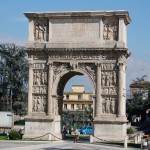 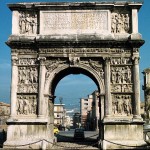 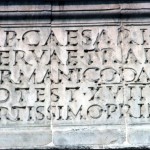 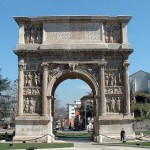 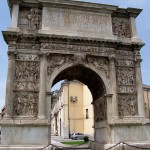 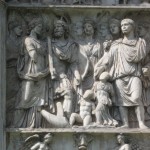 Reliefs on Arch of Trajan at Benevento 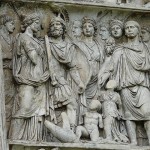 The victory of Emperor Trajan against Dacia is portrayed on the frieze while the pylons located between the semicolumns have two superimposed panels representing allegories and scenes of the imperialism of Trajan. These are separated by smaller decorative panels that portray the Victories sacrificing bulls.

The main attraction of the decorative scheme is the large reliefs decorating the interior walls of the arch bay. The opening of Via Traiana is commemorated with a representation of sacrifice on the northern side while a scene of Trajan overseeing money being handed out to poor children is depicted on the southern side. The ceiling of the vault is coffered with an artistic representation of the crowned emperor in the center.