The Arch of Titus, called Arco di Tito (in Italian) is an ancient Roman honorific arch built in ca. 82 AD by the Roman Emperor Domitian. Located near the Roman Forum on the Via Sacra, the Titus Arch was constructed after the death of Titus (older brother of Domitian) to honor his victories, including the conquest of Jerusalem in 70 CE. Later many notable triumphal arches, including the Arc de Triomphe, have been modeled on the Arch of Titus. On the basis of sculptural details and architectural style, it is believed that the famous Roman architect Rabirius was commissioned by Domitian for the construction of the Titus Arch. In the Medieval period, the arch was transformed into a fortified tower by the Frangipani family, a Roman patrician clan. Major restoration works on its outer portion as well as its exterior columns were carried out in 1817 by the Italian architect Raffaele Stern and was continued by Giuseppe Valadier. The restoration was done using travertine masonry to distinguish the restored portions from the original.

The original inscription written in ancient Roman square capitals is still in position on the eastern side of the Titus Arch. It reads

It means that the Senate and the Roman people dedicate the arch to Titus Vespasianus Augustus, the son of Vespasian. New inscriptions were engraved on the opposite side after the restoration of the arch took place during the term of office of Pope Pius VII. 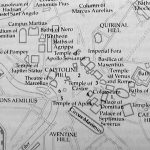 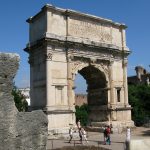 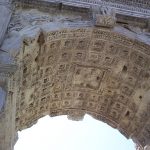 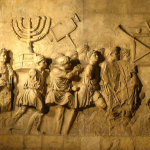 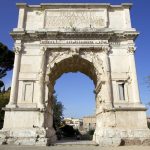 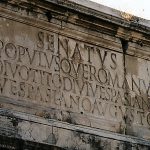 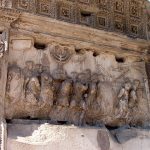 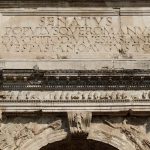 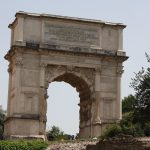 Modest in decoration, the Arch of Titus along with its decorative sculpture has become somewhat dilapidated in the course of time. Nevertheless, both the unfluted and fluted columns are still visible, as also the spandrels containing winged figures representing victory. The wedge-shaped Keystone is situated between the spandrels and there you will find a female figure on the east and a male figure on the west. The underside of the arch is decorated with a series of rectangular sunken panels with a representation of the deification of Titus Augustus at the center.

Two panel reliefs are aligned with the passageway, commemorating the joint victory by Vespasian and his son Titus. The south panel represents the pillage taken from the Holy Temple in Jerusalem. The Menorah or the golden candelabrum carved in relief is the main attraction. The north panel represents Titus as triumphator with fasces-carrying lictors and genii. It also shows Titus riding a four-horsed chariot or quadriga, and is being crowned with a circular laurel wreath by an embodiment of Victory.