The Sierra de San Francisco mountain range, located in the central region of Baja California in Mexico, concentrates some of the finest collections of Pre-Columbian rock paintings in the country. Scale wise the great mural site in Sierra de San Francisco is one of the biggest rock painting locations in the world. The cave painting site features huge panels with thousands of painted figures, and numerous rock shelters, all found in a well-preserved and conserved state.

The cave paintings are pictographic representations of the lives of the Guachimis, the Cochimis, and others who inhabited the Baja California peninsula during 1100 BCE- 1300 CE. Since some of the rock arts depicted tall human figures, it is believed that the pictographs were the works of art from a group of giants. The existence of this prehistoric rock-painting site was first announced by a Jesuit missionary Francisco Clavijero in the 18th century. Further investigations were carried out by Diguet, Georges Enguerrand, Harry Crosby, Javier Romero, Stanley Gardner, and Barbro Dahlgren.

The varied design-patterns of the cave paintings mainly include weapons, abstract elements of different forms, and animal species like pelican, eagle, octopus, tuna, turtle, wild goat, sardine, deer, lynx, puma, and rabbit. The frequent representation of animals and human figures with weapons convey the importance of hunting and warfare.

The pictographs are decorated either with a single color or with multiple colors, red and black being the most frequently used colors. Geometrical patterns like stripes of varied colors were used to draw the images. Although the murals of fishes, birds, turtles, and humans feature a front-facing angle, deer as well as other animals have a lateral perspective. 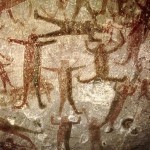 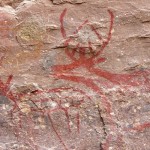 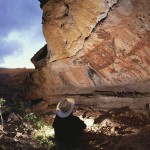 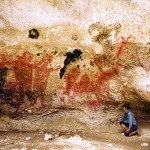 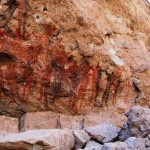 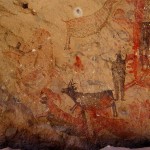 The paintings are mainly found on the roofs and the walls of rock shelters in ravines. In San Francisco, the rock painting site is mainly divided into four groups, including Cerritos, San Gregorio, Santa Teresa, and Guadalupe. Some of the notable sites in this region are Cueva de las Flechas, Cerro de Santa Marta, Cueva de la Soledad, Grutas del Brinco, Cueva de la Navidad, and Cueva del Batequi.