The main campus of Universidad Nacional Autonoma de Mexico (UNAM) is a testament to the progressive transformation of post-rebellious Mexico related to improvement in quality of life, education, fine arts, architecture, and urbanism. Located in the Coyoacan region in Mexico City, the campus consists of an Olympic Stadium, the Cultural Center, the Central Library, a few museums, an ecological reserve, and around 40 institutes.

The architecture and urbanism of the University City Campus is a fine example of how the pre-Hispanic Mexican traditions merge with the 20th century modernism. Back in the 1920s, a plan for the establishment of the University City Campus was envisaged. It was finally decided in 1943 that the campus would be set up in the region called Pedregal de San Angel. The site was then far away from the urban settlement; its landscape and soil type was produced because of the eruption of Xitle volcano. The architects Enrique del Moral and Mario Pani were awarded for designing the campus in an architectural competition. The entire project involved the works of around sixty artists and architects.

Commonly built with brick and concrete, most buildings in the University City are two to three stories high having large windows and gardens on the inside as well as on the outside. However, some buildings are different in style.

The Central Library and the Rectorate Tower

Both these square-shaped buildings are tall and secluded from the rest. They are decorated with murals created by renowned muralists Juan O’Gorman and David Alfaro Siqueiros. The mural covering the library on all sides is the largest in the world. This unique mural is based on Spanish and Aztec designs with the University’s coat of arms, making the Library one of the most iconic buildings in the University City.

Constructed in 1952, the stadium hosted the Pan-American Games in 1955, the Olympic Games in 1968, and the Soccer World Cup in 1986. Found at the heart of the University City, the stadium has intricately designed stands that were made with lava rocks that were uncovered from the volcano. Now it is used for hosting football matches in the university league. 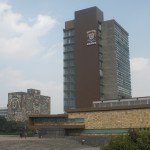 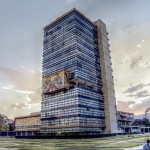 Central Library and the Rectorate Tower 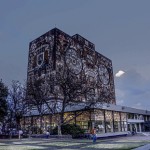 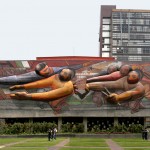 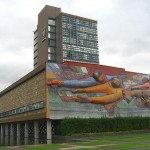 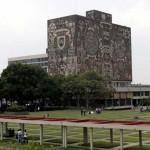 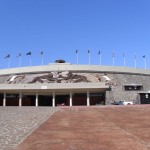 It stands as a large round solidified lava bed within the ecological reserve. It is surrounded by numerous white triangular prisms, which spread out from the center like a sunflower. This area is surrounded by many colorful metallic sculptures that are created by contemporary artists.