Constructed during the mid-eighteenth century, in the last stage of the conversion of Sierra Gorda to Christianity, the five missions of Franciscan Order were considered a reference for the persistence of evangelization of Arizona, California, and Texas. The awe-inspiring and intricate patterns on the church facades testify the creativity of the joint efforts of the Pame Indians and the missionaries. Franciscan Missions in the Sierra Gorda

During the 16th as well as the 17th centuries, several attempts were made by the Franciscans to penetrate deep into the country. However, all their attempts of establishing permanent presence proved futile. In 1744, a new authorization for establishing five missions at Jalpan, Tancoyol, Conca, Landa, and Tilaco were obtained. Although the construction of the mission complexes was delayed in the first few years, it was completed under the supervision of the Franciscan Friar Junipero Sierra in 1770.

Established in the heart of the town, this mission complex was devoted to the first evangelist James the Greater, and is formed by a church, pilgrim portal, cloister, atrium, and a chapel annex. Even though the original wall of the atrium was lost, it was reconstructed with inverted arches and three portals. The façade with its ornate portal, done in stonework and stucco, features the Virgin of Guadalupe, Our Lady of the Pillar, and a two-headed eagle.

Possibly built by Juan Ramos de Lora, this mission is devoted to Our Lady of Light. As one of the most elaborately designed mission, it has a façade with detailed vegetative ornamentation. It includes a church with choir area and a Latin cross, chapels, an atrium with a cross, and a sacristy. The façade has a rhomboid window bounded by a depiction of the Franciscan cord. It also contains three bodies, four estipite columns, and a pediment.

Situated forty km away from Jalpan, this mission church is devoted to the Archangel Michael. This is the smallest among the five missions featuring detailed decorations of foliage, coarse figures, and large flowers in indigenous style. 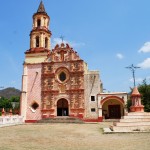 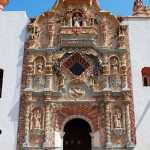 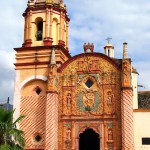 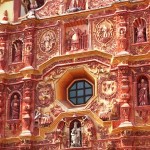 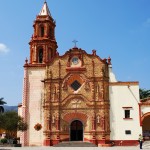 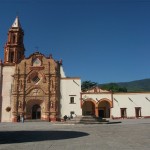 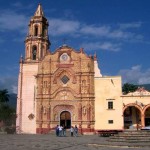 Franciscan Missions in the Sierra Gorda

This mission church, devoted to Francis of Assisi, was built during 1754-1762 by Juan Crespi. It is constructed on a slope with the bell tower separated from the church’s center by the baptistery. The facades have three vertical and three horizontal partitions, with the coat of arms situated over the mission’s main entrance.

Constructed by Miguel de la Campa during 1760-1768, this mission is devoted to Our Lady of Immaculate Conception. Distinguished by its balanced composition as well as its slender bell tower, its intricately sculptured façade is also considered one of the best.