The church complex of the Sanctuary of Atotonilco is a designated World Heritage Site located near the town of San Miguel in Guanajuato, Mexico. The construction of this Jesuit sanctuary under the supervision of Father Luis Felipe Neri de Alfaro started in 1740. Characterized by rich mural works in Baroque style adorning the chapels and the main nave, the church complex is now regarded as the “Sistine Chapel of Mexico”. According to folklore, Father Neri was told in is dreams by Jesus to convert the area into a consecrated space for worship and prayer. He purchased the entire Hacienda of Atotonilco to construct the complex. A ceremony to mark the beginning of its construction was held on 3 May 1740 when the foundation stone was blessed by Father Neri.

The initial phase of set up lasted for eight years during which the tower, the main nave, and the Purisisma Chapel were built. The place was consecrated after the first phase, and a graphic representation of Jesus was placed. Most of the annexes and the chapels were established during the second phase that continued until 1776. Though the exterior of the church is simple, the high walls make it look like a fortress. Apart from the outer walls, the clock tower, and the cupolas are tall structures measuring 20m and 12m respectively. The main entrance faces east, giving the church complex an east-west position. While the clock tower and the Casa de Ejercicios lie along the south of the main façade, the Santa Escuela de Cristo lies to its north and a narrow atrium to its front. The main church building is surrounded by chambers and chapels on its northern and southern edges. The ceilings, as well as the walls of its interiors, are completely covered in sculpture, mural work, oil paintings, and inscriptions that are designed in the Mexican Baroque style. The extensive mural works were mostly done by the Mexican artist Antonio Martinez de Pocasangre. These paintings replicate the Flemish style of painting that was brought over by the Spaniards from Europe. The murals on the main nave’s ceiling depict the stories of the ministry of Jesus as told in the Gospels. The entrance area features the paintings representing the Last Judgment. The arches with written verses separate the ceiling into several sections, which are visible while approaching the main altar.

Vault of the Old Sacristy

It contains scenes that portray the establishment of the church complex as well as the life of Felipe Nori.

Constructed during 1740-1748, its main altar features the Virgin of Sorrows.

This 18th-century chapel can be accessed either from the Capilla de Soledad or through the present sacristy.

It is somewhat a concealed rectangular area situated to the north of the choir region. 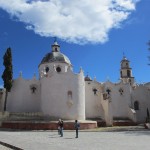 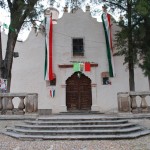 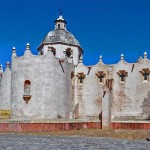 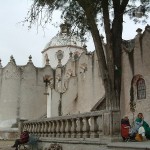 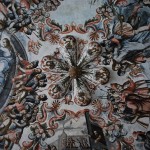 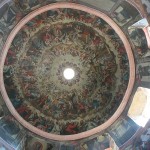 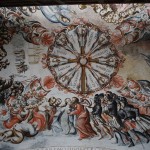 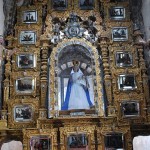 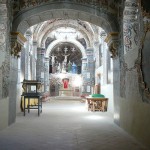 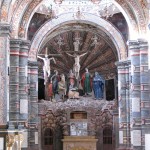 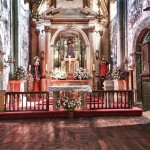 Chapel of the Holy Burial 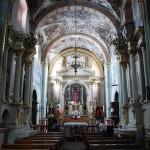 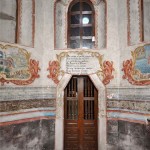 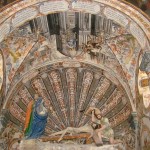 Vault of the Old Sacristy

Chapel of the Holy Burial

This chapel, built during 1759-1763, contains murals that represent the death and burial of Jesus as well as His resurrection.

It is the largest chapel in the complex exhibiting a cross-architecture with a covering of a cupola and vaults.