Paquime, located in the Casas Grandes municipality in the Mexican state of Chihuahua, is a pre-Columbian archaeological site distinguished by the remains of some impressive adobe buildings that were originally several stories high. It includes the ruins of ceremonial monuments having earthen architecture as well as the remains of numerous rooms with T-shaped doorways, exhibiting remarkable traits of Puebloan architecture. The archaeological site testifies the important elements of the cultural development of North America, as also of the links between commerce and culture in the pre-Hispanic era. Between AD 1130 and 1300, people started living in the fertile valley of San Miguel River in small settlements. The largest of the settlements is known as Paquime, which started as a collection of around 20 house clusters, each having a plaza and an enclosing wall. Historic evidence suggests that the site had a composite water-control-system with channels, reservoirs, and underground drain systems to supply water to the houses. The town was rebuilt after it was burned in 1340. It included multi-storey buildings, I-shaped ballcourts, effigy mounds, stone-faced platforms, and a marketplace. In about 1450, the town was abandoned.

Sizable portions of remains of pre-Columbian buildings were existent even before the beginning of significant archaeological explorations. The remains were made of sun-dried mud and gravel blocks irregular in length and 22 inches thick. The walls appeared as if it was plastered on both the sides. The main structure was rectangular and had a dimension of 240 m X 76 m.

The city was divided into two halves – the eastern half has rectilinear structures used for manufacturing or domestic purposes, while the western half has buildings with open earth mounds bordered in stone. At Paquime, the pit houses were semi-circular and circular in shape, while the coursed-adobe rooms were built around plazas. At some of the angles, the walls are 40-50 feet high, indicating an original height of 6-7 stories. 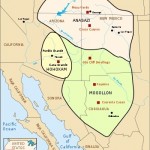 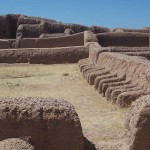 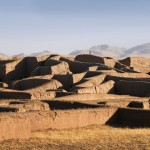 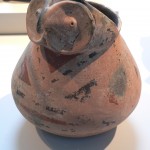 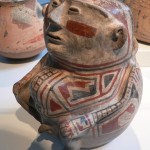 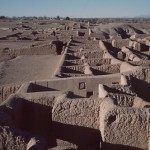 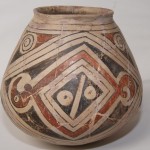 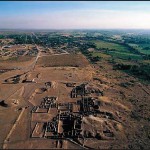 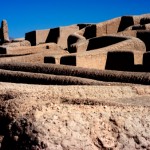 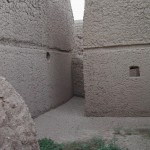 Inside of Casas Grandes 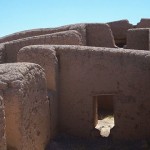 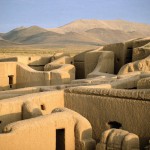 Specific craft works included the production of ornaments, copper bells, beads from mollusks, and pottery. The pottery featured a reddish or whitish surface, with black, brown, red, or blue ornamentation. The vessels and effigy bowls were shaped in the form of painted human figures. A large collection of pottery artifacts from Casas Grandes is now held by the INAH, the Stanford University, California and the Museum of Peoples and Cultures, Utah.