Rani ki Vav is an ancient stepwell situated on the banks of Saraswati River in Patan district of Gujarat, India. It is one of the most splendid stepwells in India built in memory of an 11th century AD ruler. The stepwell symbolizes the rich art and culture of ancient India. It was constructed during the reign of the Solanki dynasty and presumed to be commissioned by Queen Udayamati in 1063 AD in memory of her husband Bhimdev I who was the monarch of the Solanki dynasty. The stepwell got flooded by the Saraswati River and was excavated by the Archaeological Survey of India in the late 1980s.

The step well comprises minutely and exquisitely carved architecture reflecting the craftsmen’s expertise in stepwell construction at that time and also of the Maru-Gurjara architectural style. The stepwell is 64m long, 20m wide and 27m deep. A unique feature is a stepped corridor partitioned at regular intervals by pillars leading to multistory pavilions.

The stepwell got silted up, and a large part of it is not visible currently barring some rows of the sculpted panel in the circular region. An area of the west is still in existence from which it seems that the wall was built of brick and stone. Pairs of vertical brackets project from this wall which supports the various galleries. The brackets are placed in tiers and are richly carved.

A small gate lies below the last step of the stepwell with a 30-kilometer long tunnel that leads to the Sidhpur town near Patan. At present, the tunnel is blocked by mud and stones. 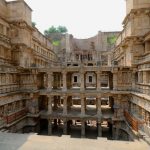 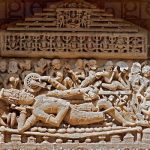 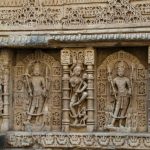 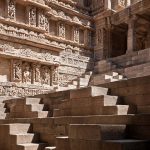 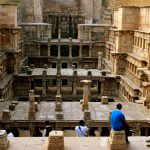 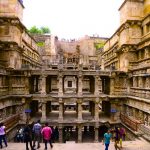 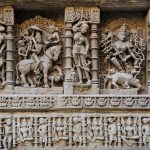 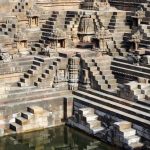 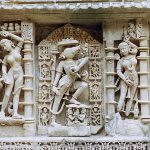 The step wells of Gujarat are not merely places for collecting water and socializing, but holds immense spiritual significance. From simple structures, the stepwells got intricately built with stone carved deities most probably to uphold the sanctity of water.

Rani ki vav resembles an inverted temple. The steps start from ground level leading downwards through many pillared pavilions reaching to the deep well below. The galleries house more than 800 intricate sculptures – the focal theme of which is the Dasavataras or the ten incarnations of Vishnu which also includes Buddha. Sadhus, Brahmins, and apsaras accompany the avatars.

At water level, there is a carving of Sheshashayi-Vishnu which portrays Vishnu resting on the thousand-hooded snake Shesha – where it is said Vishnu rests in the infinity between epochs.