Bhimbetka rock shelters are an ancient historical site dating back to Paleolithic age, located in the Raisen District in Madhya Pradesh state, India. The site, lying inside the Ratapani Wildlife Sanctuary, is an evidence of the earliest existence of human life in the Indian Subcontinent, and hence marks the start of the Indian Stone Age. The name Bhimbetka is associated with Lord Bhima – one of the lead characters of Mahabharata. Homo erectus inhabited some of the shelters more than 1,00,000 years ago. Some of the Stone Age rock paintings found at the site is 30,000 years old. The caves also reflect early evidence of dance. Based on information from local Adivasis, Bhimbetka was first mentioned in Indian archeological records as a Buddhist site in 1888. Later, in 1957, V. S. Wakankar with a team of archeologists discovered many prehistoric rock shelters. On a visit to Bhopal by train he came across some rock formations similar to the ones he had seen in France and Spain. He visited the area with a team of archeologists and discovered the rock shelters.

Since then over 750 such rock shelters have been identified – 243 in the Bhimbetka group and 178 in the Lakha Juar group. The site bears a resemblance to similar rock art sites like Kakadu National Park in Australia, the Upper Paleolithic cave paintings in Lascaux, France, and the cave paintings of the Bushmen in the Kalahari Desert. Archaeological research finds a continuity of Stone Age cultures and also the world’s oldest stone walls and floors. 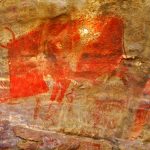 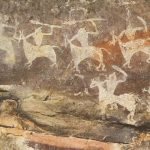 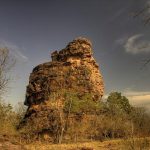 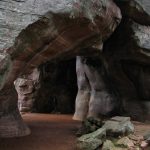 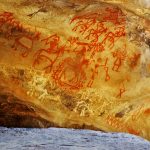 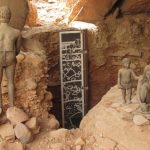 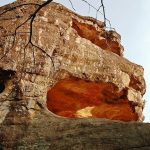 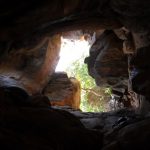 Inside View of Bhimbetka Rock Shelter 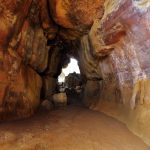 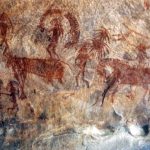 A large number of paintings adorn the caves and rock shelters of Bhimbetka. The earliest paintings are deemed to be 30,000 years old while some dates back to as recently as the medieval period. Accordingly, the pictures can be grouped under different periods. The paintings that date to Upper Paleolithic period are linear representations in dark red and green of large figures of animals like tigers, bisons, and rhinoceroses.

The paintings of Chalcolithic age denote that the cave dwellers had contact with the agricultural communities of the Malwa plains, exchanged goods with them.

The paintings belonging to early historic period are painted in white, red and yellow, have a schematic and decorative style. The paintings depict religious symbols, an association of riders and religious beliefs are denoted by figures of magical sky chariots, yakshas, and tree gods.

The paintings of the medieval period are geometric linear and exhibit crudeness and degeneration in the artistic style. Manganese, hematite and wooden coal were combined to prepare the colors.

A famous rock known as the Zoo Rock portrays elephants, Barasingha, deer, and bison. Another rock depicts a deer, a peacock, a snake, and the sun. Two elephants with tusks are painted on another stone.