Ramanathaswamy temple is a well known Hindu temple located on Rameswaram Island in Ramanathapuram district of the state of Tamil Nadu, India. It is one of the twelve Jyotirlinga temples dedicated to Lord Shiva. The temple is one among the 274 Paadal Petra Sthalams where Appar, Sundarar, and Tirugnana Sambandar – the three of the most respected Nayanars have glorified the temple with their songs. The temple is a holy pilgrimage site for Shaivites, Vaishnavites, and Smarthas. The Pandya Dynasty expanded the temple in the 12th century while Jeyaveera Cinkaiariyan and his successor Gunaveera Cinkaiariyan of the Jaffna kingdom renovated the main shrines sanctum. Legend has it that Rama, the avatar of the god Vishnu wished to have a large lingam to worship God Shiva to free himself from his sins committed during the Ramayana war. He directed his follower Hanuman to bring a large lingam from the Himalayas. When Hanuman delayed, Rama’s wife Sita made a small lingam out of the available sand in the seashore which is believed to be the lingam of the temple.

The sanctum of the temple consists of two lingams – one is believed to be built by Rama’s wife Sita which formed the principal deity and the other one brought by Hanuman from Kailash known as Vishwalingam. The tradition of worshipping the Vishwalingam first continues even today as Rama instructed so since it was brought by Hanuman.

The temple boasts the longest corridor among all Hindu temples in India. A high compound wall stands on all four sides of the temple premises measuring around 865 feet furlong from east to west and 657 feet furlong from north to south with big towers to the east and the west and gate towers to the north and south. The construction of the present edifice was the effort of many individuals spanning centuries. The Setupatis of Ramanathapuram are credited for establishing the temple.

The interior consists of noticeable corridors running between large colonnades on more than 5 feet high platforms. Sandstone pillars, beams, and ceiling support the second corridor. The renowned third passageway, famously known as” Chokkatan Mandapam,” was built by Muthuramalinga Setupati, where deities are decorated and kept during festivals. The western entrance to the third passageway houses the statue of Muthuramalinga Setupati along with his two ministers.

The outer group of corridors is considered to be the longest in the world measuring about 400 feet in the east and west and 640 feet in the north and the south with a height of about 6.9 m.

The outer corridor comprises around 1212 pillars with a height of about 30 feet. The height of rajagopuram or the main tower is 53 m. The carving of the pillars reflects individual composition.

The temple also houses many halls. 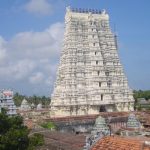 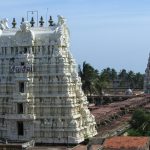 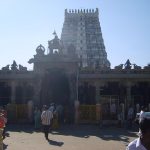 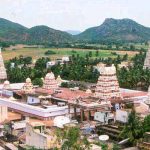 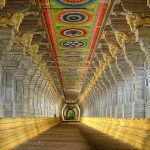 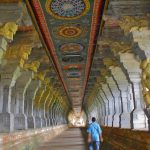 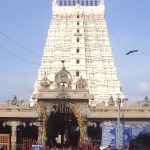 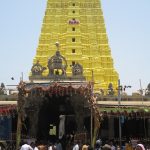 Sixty-four holy water bodies or Tirthas are present in the island of Rameswaram, out of which twenty-two are within the Rāmanāthasvāmī Temple. The number 22 signifies the 22 arrows in Rama’s quiver. Taking baths in these tanks is an important feature of the pilgrimage to Rameswaram and is regarded as equivalent to penance.

The temple is one of the four divine sites or Hindu Char Dham.