Kashi Vishwanath Temple or Kashi Vishwanath Mandir is a famous Hindu temple located in Varanasi in the state of Uttar Pradesh, India. The temple is dedicated to Lord Shiva and is one among the twelve Jyotirlingas. It lies on the western bank of the river Ganga. The temple has been destroyed and reconstructed many times in its chequered history. The original structure was destroyed by the battalion of Qutb-ud-din Aibak in 1194 CE when he overpowered the Raja of Kannauj as a commander of Mohammad Ghori. A Gujarati merchant rebuilt the temple during the reign of Delhi’s Sultan Iltutmish (1211-1266 CE). The temple was again devastated during the reign of either Hussain Shah Sharqi (1447-1458) or Sikandar Lodhi (1489-1517). The temple was built by Raja Man Singh during Mughal Emperor Akbar’s reign, but was boycotted by orthodox Hindus as Man Singh allowed the Mughals to marry within his family. In 1585, Raja Todar Mal rebuilt the temple at its original place with funds from Akbar.

Emperor Aurangzeb destroyed the temple in 1669 CE and constructed the Gyanvapi Mosque in its place. The remnants of the previous temple are visible in the foundation, the columns and at the hindmost part of the mosque.

The Maratha ruler Malhar Rao Holkar chalked out a plan to demolish the mosque and rebuild the temple at its site in 1742. The plan did not materialize to some extent due to the intervention of the Nawabs of Lucknow, who managed the territory. Around 1750, Jaipur’s Maharaja initiated a survey of the land around the site with the aim of purchasing land to rebuild the temple, but the plan failed once again. It was in 1780 that the present temple was finally constructed adjacent to the mosque by Malhar Rao’s daughter-in-law Ahilyabai Holkar.

In 1828, the widow of the Maratha ruler Daulat Rao Scindhia of Gwalior State, Baiza Bai built a low-roofed colonnade comprising of more than 40 pillars in the Gyan Vapi precinct. Contributions poured in from many noble families representing various ancestral kingdoms of the Indian subcontinent for the operations of the temple. In 1841, the Bhosales of Nagpur presented silver to the temple while Maharaja Ranjit Singh gifted 1 ton of gold for plating the dome of the temple in 1859.

The temple complex composed of a series of smaller shrines located in a small lane known as the Vishwanatha Galli, close to the river. The holy Linga is made up of black stone, measuring 60 cm in height with a circumference of 90 cm, lodged in a silver altar. The temple is quadrangle in shape encircled by shrines of other gods. The complex houses small temples for Kaalbhairav, Dhandapani, Vishnu, Sanishwara, Vinayaka, Avimukteshwara, Virupaksha and Virupaksh Gauri. A small well, known as Gyan Vapi, lies to the north of the main temple. Legend has it that the Jyotirlinga was hidden in the well to protect it from invaders. 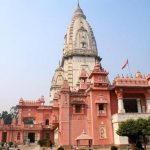 Inside of Kashi Vishwanath Temple 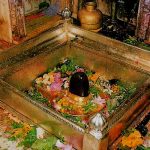 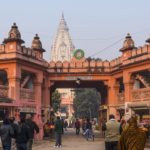 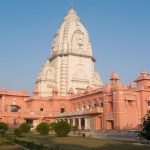 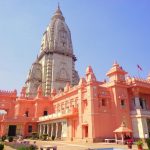 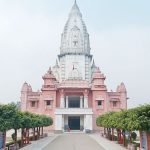 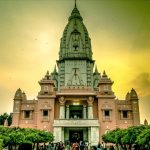 The temple is considered a highly venerated Hindu place of worship. Many renowned saints including Adi Sankaracharya, Ramakrishna Paramhansa, Swami Vivekananda, Bamakhyapa, Swami Dayananda Saraswati, Goswami Tulsidas, and Guru Nanak visited the site. A visit to the temple with a holy dip in the river Ganga is considered one among many ways to attain Moksha.