Shaniwar Wada is a famous fortification located in Pune city, Maharashtra, India. Originally constructed as the residence of the Peshwas, the fort was the center of all activities of the Maratha Empire till 1818. The foundation of the palace fort was laid by Peshwa Baji Rao I in 1730 and the residence complex was completed in 1732 at a cost of Rs. 16,110. The building was constructed by a contractor from Rajasthan known as the ‘Kumawat Kshatriya’. Several additions such as the fortification walls, gates, and bastions, court walls, other buildings, fountains, reservoirs were made to the complex later by the Peshwa successors.

The seven storied building was supposed to be built entirely of stone, but after completion of the base floor, the natives of Satara objected to the Siva (king) stating that a stone monument can only be built by the Siva (king) and not the Peshwas. Subsequent to this, an official letter was sent to the Peshwas clearly mentioning that the structure had to be built of brick and not stone.

The edifice was completed as per the declaration, and ninety years later when the fort was attacked by the British Artillery, all the six stories made of brick collapsed barring the stone base which remained undamaged. In 1828, an unexplained fire heavily destroyed the fort – a few surviving structures is what it remains today as the tourist site.

The complex has five gates – the Dilli Darwaza being the main gate which faces north towards Delhi. The north facing fort was considered to be an indication of Baji Rao’s ambitions against the Mughal Empire. The immensely strong gate comprises of massive doors through which even elephants could pass. To prevent elephants from charging the gates, each pane of the gate consists of sharp steel spikes arranged in a grid at an approximate height of the forehead of an adult elephant.

Boiling oil could be poured on the enemy through the arrow- loops and machicolation chutes of the bastions flanking the gateway. A man-sized door meant for general entries and exits on the right pane which is too small for the marauding army to enter quickly. 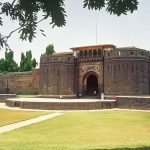 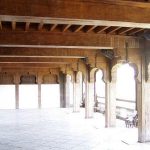 A Hall in the First Floor Above Dilli Darwaja Shaniwar Wada 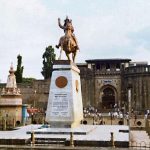 Bajirao Statue in Front of the Shaniwar Wada 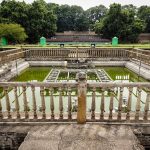 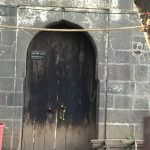 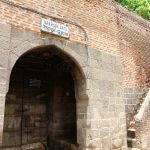 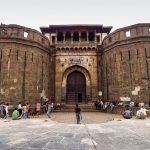 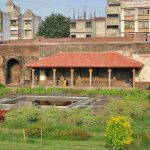 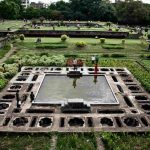 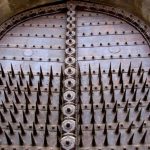 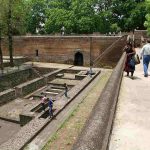 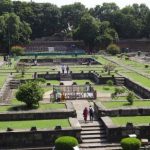 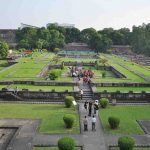 As the buildings were damaged in a devastating fire  1828, only descriptions about the living areas are available. The palace houses some important buildings like the court reception hall of the eldest royal, dance hall and the old mirror hall. All the doorways of the buildings are decorated with carved teak arches with embellished teak pillar-shaped trunks supporting the ceilings which were adorned with teak tracery, carved creepers and flowers. Enchanting glass chandeliers hung from the ceilings. High-quality marble made up the floor and covered with fascinating Persian carpets. The walls were adorned with paintings portraying scenes from the Ramayana and the Mahabharata.

The fort complex houses an exquisite lotus-shaped fountain built for the enjoyment of infant Peshwa Sawai Madhavrao. The fountain was designed as a sixteen petal lotus with each petal containing sixteen jets with an arch of eight-foot height. The complexity and the intricacy of the fountain were unparalleled at that time.

The palace-fort, commonly believed to be haunted, is also flanked by a flower garden.