Undavalli Caves are the finest examples of early monolithic Indian rock-cut architecture located in Undavalli of Guntur district in Andhra Pradesh, India. The caves bear testimony to the craftsmanship of the ancient Viswakarma sthapathis. The caves are linked to a very dominant dynasty of India, namely the Vishnukundina kings, who ruled over a significant part of India during 420 – 620 AD. The early Vishnukundina rulers were the followers of Buddhism, and the Undavalli caves were initially structured as a Buddhist temple. For some time, the caves were used by Buddhist monks and remains of Buddhist statues are still preserved up to this day. However, the later kings were the patrons of Brahminical faith. Subsequently, the caves were transformed into a Hindu temple and most of the artwork that is seen today is related to Hindu religion. Some historical documentations suggest that it was originally a Jain cave. 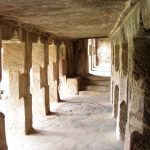 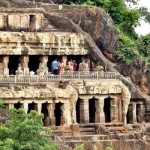 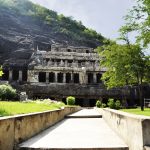 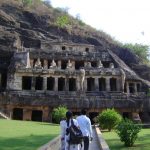 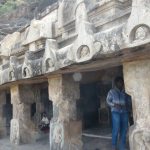 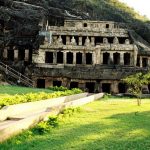 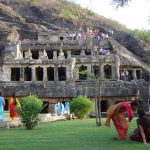 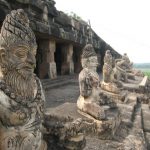 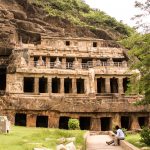 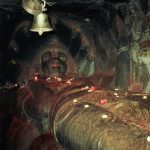 The caves were carved out of sandstone hills in the 4th to 5th centuries A.D. There are many rock-cut caves, but the most noticeable is the largest, four-storied cave. The main cave signifies earliest examples of Gupta architecture.

Entry to the first floor is through eight to nine roughly shaped openings with huge square columns in between. The sculptures and planning in the first floor depicts a Vihara – a Buddhist monastery and includes many Buddhist artworks. The walls of the first floor contain frescoes depicting scenes from mythological stories.

The second floor houses the most astonishing sculpture in the temple – an enormous reclining statue of Vishnu sculpted from a single block of granite. Numerous sculptures adorned the façade of the third floor including portraying of lions and elephants. The sculptures adorning the walls of the caves depict the brilliant artistry of the skilled craftsmen.

Green countryside surrounds the caves paving the way for an excellent view of rock-cut architecture from the hill top above the caves.