Shaheed Minar (English: Martyrs’ Monument), previously known as the Ochterlony Monument, is a significant historical monument located in the city of Kolkata in the state of West Bengal, India. The monument was built in 1828 to commemorate the victory of Major-general Sir David Ochterlony, the commander of the East India Company who led the armed forces to victory against the Marathas in 1804 and the Gurkhas in the Anglo-Nepalese War. Designed by J.P. Parker, the edifice was built by Burn & Company in memory of David Ochterlony and expenses were met from public funds.

In 1969, it was rededicated to the memory of persons who laid down their lives during the Indian freedom movement and hence its present name.

The base of the monument was built following the Egyptian architectural style while the column is based on Syrian architecture and the dome follows Turkish structural design. A winding staircase comprising 223 steps leads to the top floor where lie two balconies. 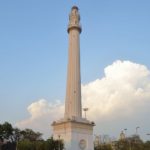 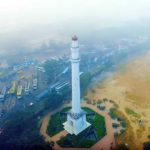 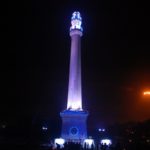 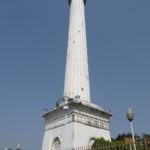 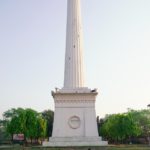 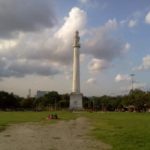 The vast stretch of field to the south of the monument is called the Shaheed Minar Maidan, or the Brigade Ground, has a long history of holding political meetings and fairs. The first political gathering on the ground took place in 1931, chaired by Rabindranath Tagore to condemn the killing of youth by the British in Hijli. Since then the ground has been the venue for countless political rallies.

The vast greenery serves as a perfect place to escape from the concrete jungle of the city and enjoy the fresh air.

Since an accident in 1997 when a tourist jumped off the balcony of the monument, police permission is required to climb the steps of the memorial.