The Badami Cave Temples are a cluster of Hindu and Jain cave temples situated in the town of Badami in the Bagalkot district, northern Karnataka, India. The caves are carved out of the hill opposite the Badami Fort. Out of the four caves, three are Hindu while the fourth one is Jain. The cave temples located in the town of Badami – the kingdom of the Chalukya dynasty, are man-made temples carved out of Badami sandstone. Dating back to the 6th century, the cave temple with its unique rock-cut architecture forms the model for other temples constructed later in the region. The cave temples reflect both the South Indian Style (Dravidian) and the North Indian style (Nagara) of architecture. The interior of the four caves consists of an entrance with a verandah supported by stone pillars and brackets leading to the main hall and the shrine. The temples are connected by a stepped path with intermediate terraces, which overlook the town. The cave temples are marked 1 to 4 in an ascending series. There is also a fifth cave – a natural cave serving as a Buddhist temple that can be entered only by crouching.

Access to the cave which is about 59 feet above the ground level is through a series of steps. The columns of the verandah contain reliefs of the God Shiva shown in dancing poses and incarnations. The cave illustrates the dancing Shiva as Nataraja. Apart from God Shiva, a wall depicts Goddess Durga killing Mahishasura. The cave also contains carved sculptures of goddesses Laksmi and Parvati.

This cave can be reached by climbing 64 steps from the first cave and is mainly dedicated to Vishnu. Among other reliefs that adorned the cave, the largest relief portrays Vishnu as Trivikrama – with one foot on earth and the other directed towards the north. The cave also consists of other representations of Vishnu which include Varaha (A boar) portrayed rescuing Bhudevi from the bottom of the ocean and Krishna avatars.

This cave is the largest and most minutely carved cave in the complex. It contains giant figures of Trivikarma, Bhuvaraha (Varaha), Anantasayana, Harihara, Paravasudeva, and Narasimha. Though the cave focuses mainly on Vaishnavite, it also shows Harihara – half Vishnu and half Shiva merged into one. The cave can be reached by climbing 60 steps from the cave II. The verandah goes 48 feet deep into the mountains. A shrine at the end makes the cave 12 feet further inside. The height of the cave is 15 feet and is supported by six pillars.

The whole cave is covered with splendid adornments, and there are wall paintings on the ceiling as well. Among the magnificent paintings, the center of attraction is the four-armed Brahma on his swan. Underneath this mural is a lotus medallion – a place for offerings.

This is the newest and the highest located cave in the complex serving as a Jain temple. Here, Mahavira is shown sitting on a lion throne. The inner pillars and walls have engraved Jain Tirthankara images. 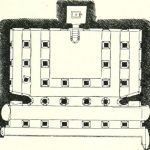 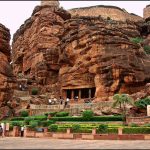 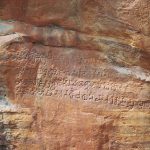 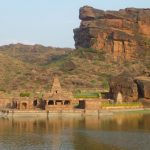 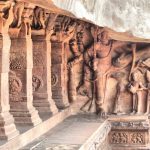 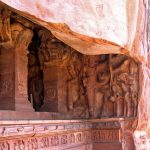 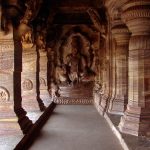 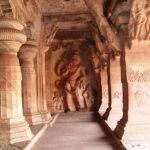 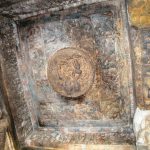 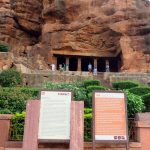 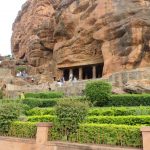 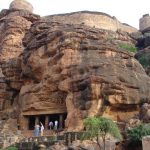 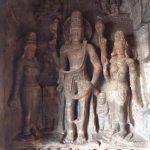 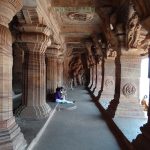 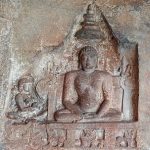 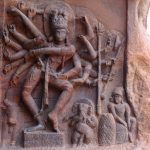 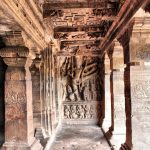 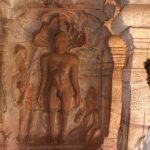 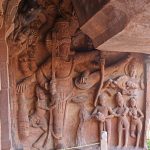 Statue of Lord Vishnu in the from of Trivikrama 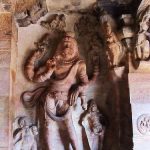 It is a small sized cave containing a carved statue placed over a sculpted throne with reliefs. The face of the statue is damaged with many of its parts are missing.

Another cave was discovered which is about 500 meters from the four main caves and contains 27 rock carvings. The cave portrays Vishnu and other Hindu Gods. An inscription in Devanagari script was found in the cave. The date of the carvings is unknown.