The Mausoleum at Halicarnassus, also referred to as Tomb of Mausolus, was an ancient tomb located in the city of Halicarnassus (present name Bodrum) in Turkey. It was built between 353 and 350 BC  for the Persian Satrap Mausolus and his sister-wife Artemisia II as it was the custom of the Caria rulers to marry their own sisters. The ancient city of Halicarnassus was the capital of a small regional kingdom within the Achaemenid Empire in the 4th century BC. In the year 377 BC, the ruler Hecatomnus of Mylasa died after which his son Mausolus took over the reign. Mausolus with his sister-wife Artemisia ruled Halicarnassus for 24 years. Mausolus died in 353 BC leaving control of the city to Artemisia to rule. Artemisia died two years after the death of her brother-husband Mausolus. As documented, the urns with its ashes were to be placed in the yet unfinished tomb.

It was most likely that Mausolus had planned the construction of his tomb before his death and after his death, Artemisia continued with the project.  While building the tomb, Artemisia spend lavishly, sending messengers to Greece to bring in the most talented sculptors of the time which included Scopas, Leochares, Bryaxis, Timotheus and hundreds of other artists.

The tomb was built on a hill overlooking the city, and the entire structure sat in an enclosed courtyard at the center of which the tomb was placed on a stone platform. A stairway with stone lions along its sides led to the top of the platform. The outer walls of the platform consisted of many statues of gods and goddesses. Stone warriors mounted on horseback at each corner guarded the tomb. The marble tomb at the center of the platform rose as a tapering square block to about one-third of the mausoleum’s height. This section was covered with bas-reliefs depicting action scenes from Greek mythology and history. Thirty-six slim columns rose for another third of the height on the top of this section with a statue standing between each pair of columns. A solid block at the back of the columns supported the weight of the tomb’s massive roof. The roof, comprising the final third of the height was in the shape of a pyramid. At the top, four big horses pulling a chariot rode with images of Mausolus and Artemisia. 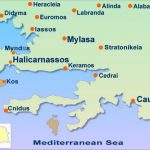 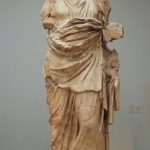 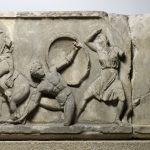 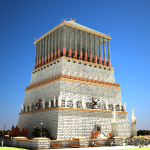 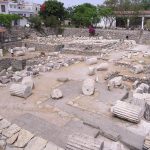 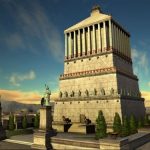 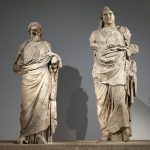 Statue of Mausoleum at Halicarnassus

For many years the mausoleum overlooked the city of Halicarnassus. It was untouched when Alexander the Great invaded the city in 334 BC. The mausoleum was also undamaged after pirate attacks in 62 and 58 BC. For sixteen centuries it stood above the city’s ruins. A series of earthquakes damaged the columns and shattered the bronze chariot. By 1404 AD, only the base of the mausoleum was recognizable.

During the late 15th century, Knights of St John of Rhodes invaded the region and built the Bodrum castle using the stones of the mausoleum. Expecting a Turkish invasion in 1522 led the crusaders to further strengthen the castle at Halicarnassus, which was then called Bodrum and much of the remaining portion of the mausoleum was used to build the castle walls. The foundation of the knights on the island of Rhodes was conquered by Suleiman the Magnificent after which the castle and Bodrum went under Ottoman Empire.

Before grinding much of the remaining sculptures of the mausoleum for plaster, the knights removed many of the best works and placed them in the Bodrum castle where the sculptures remained for three centuries.

Many theories were advocated, but exactly when and how the mausoleum got transformed into a ruin remained unknown.

A British archaeologist unearthed the sections of the relief that adorned the walls and portions of the stepped roof as well as the statues of Mausolus and Artemisia that stood at the top of the building.