Hagia Irene or Hagia Eirene, also referred to as St Irene (aya irini in Turkish), is a former Greek Orthodox Church located in Istanbul, Turkey. The church lies within the Topkapi Palace complex, behind the renowned Hagia Sophia. At present, the building is a museum and also serves as a concert hall. Byzantine Emperor Constantine I built the church in the 4th century AD on the site of a pagan temple. He dedicated the church to the peace of God along with Hagia Sophia and Hagia Dynamis which were also dedicated to God’s attributes. The church served as the church of the Patriarchate before the completion of Hagia Sophia in 360. In 381, the church hosted the First Council of Constantinople. The building was burned during the Nika riot in 532 and was restored under Emperor Justinian I in 548.

The building was damaged severely by an earthquake in the 8th century. The building’s present form is chiefly from the repairs made at that time. Emperor Constantine V ordered the restoration and decorated the interior with mosaics and frescoes. It is the sole example of a Byzantine church in the city of Istanbul that retains its original atrium. Expansion of the church took place during the 11th and 12th centuries.

The building reflects a typical Roman basilica, comprising a nave and two aisles separated by columns and pillars. It consists of main space, a narthex, galleries and an atrium. The dome, measuring 35 m in height and 15 m in width, comprises twenty windows.

Above the main narthex is a great cross in the half-dome where the image of the Pantocrator or Theotokos was placed in Byzantine tradition, a unique remnant of the Iconoclastic art.

The church was enclosed within the walls of the Topkapi palace after the conquest of Constantinople by Mehmed II in 1453. The household troops and bodyguards of the Sultans of the Ottoman Empire known as Janissaries used the church as an armory. The building was also used for storing valuable goods seized in war. Sultan Ahmet III (1703–1730) transformed the building into a weapons museum. In 1846, Ahmed Fethi Paşa, Marshal of the Imperial Arsenal, converted the church into a military antique museum. It served as a military museum since 1908, but in 1978 it was handed over to the Turkish Ministry of Culture. 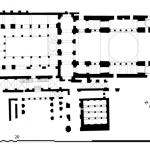 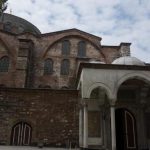 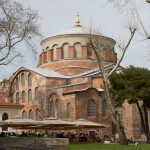 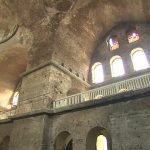 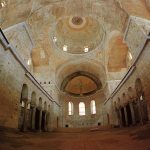 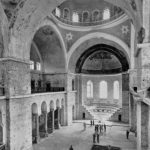 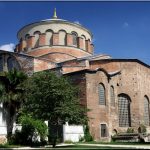 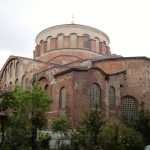 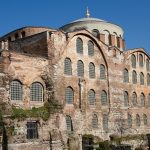 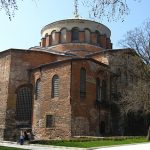 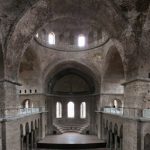 Inside of Hagia Irene

At present, the building serves chiefly as a concert hall for classical music performances because of its brilliant acoustic and splendid atmosphere. Since 1980, the church has been the venue for numerous concerts of the Istanbul International Music Festival.

In 2000, the church host a special show, produced by Turkish haute couture designer Faruk Saraç. The show exhibited seven hundred designed pieces including the robes inspired by the thirty-six Ottoman Emperors ranging from the founder to the last sultan. The show was accompanied by music and depicted the lives of Sultans and demonstrations of dancing during the Ottoman era.

For quite a number of years, entry to Hagia Irene was restricted to events or by special permission, but now it is open to the public since 2014.