The citadel of Kaymakli housed the Kaymakli Underground City, which is located in the Central Anatolia Region of Turkey. The area is situated about 19 km from Nevsehir.

Kaymakli underground city is the widest among the many underground cities in the Cappadocia region of Turkey. It was previously known as Enegup in ancient times, having been excavated during Hittite times and expanded with the passing of centuries. According to the Turkish department of culture, the caves may have been first built during 8th–7th centuries BC by the Phrygians – an Indo-European people. It is connected with Derinkuyu – the deepest underground city in Cappadocia, through a network of tunnels. According to estimates, the city which used to house more than 3000 people was mainly used during the Byzantine times for protection from marauding Arabs. The city has acted as an escape route from religious persecutions many times in its long history. It was as late as the 20th century when the Cappadocian Greeks used it to escape persecution from the Ottoman Empire.

After the population exchange between Greece and Turkey in 1923, the Christian inhabitants were ousted from the region and tunnels were forsaken.

There are eight underground levels made up of low, narrow and steep passages. Out of them, only four are open to public. The first floor was earmarked for stables. The second floor housed a church and living areas while the third floor consisted of kitchen, wineries, oil presses and used for other storage purposes. This floor consisted of a block of andesite with relief-textures. The stone was not fetched from outside as it was a portion of the andesite layer found while digging. According to research, the stone was originally used for making cold formed copper objects. Copper that was brought to the city was most probably dug from a quarry between Aksaray and Nevsehir. 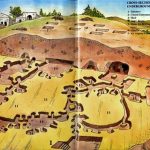 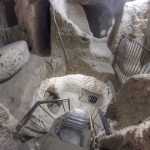 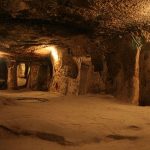 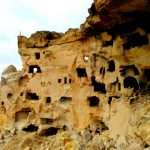 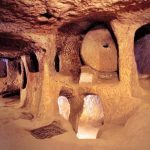 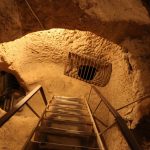 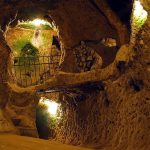 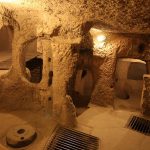 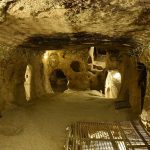 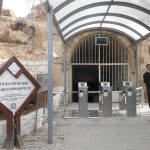 The fourth floor was used for storing earthenware jars and for other storage purposes. The large storage areas suggest a large population in the city.