Hagia Sophia, known as Ayasofya in Turkish, is a renowned historical edifice located in Istanbul Turkey. It remained the world’s largest cathedral until the construction of the Seville Cathedral. It was an Eastern Orthodox Cathedral from the date of its construction and was the hub of the Patriarch of Constantinople barring the period between 1204 and 1261 when Fourth Crusaders converted it to a Catholic Cathedral under the Latin Empire.

In 1453, the building was transformed into an Ottoman mosque and remained so till 1931. Many relics including bells, altar, iconostasis, mosaics representing Jesus, Mother Mary, Christian saints were removed. Islamic architectural features such as minarets, mihrab, minbar were included. On February 01, 1935, it was opened as a museum after getting secularized.

Byzantine Emperor Justinian I ordered the construction of the building to serve as a church. The structure was designed by the Greek geometers, namely Isidore of Miletus and Anthemius of Tralles. More than ten thousand people were employed, and it was inaugurated on December 27, 537.

Hagia Sophia suffered many damages in its long history due to earthquakes.

The interior is adorned with mosaics and marble pillars of great artistic value while the nave is covered with a central dome and the exterior with stucco. The royal gate was the main entrance and was reserved only for the emperor.

The upper gallery encloses the nave till the apse and is shaped like a horseshoe. The area was mainly reserved for the Empress, housing many mosaics. It also houses runic inscriptions believed to be engraved by the Varangian Guard.

The dome of the building attracted the attention of many historians, architects, and engineers due to the innovative way the original architects visualized it. The original dome was damaged during the earthquake of 558 which was replaced by the second one in 563, but, a large portion of the second dome also collapsed.

Loge of the Empress

The center of the upper gallery contains the loge of the Empress. It is from here the Empress and court ladies would watch the proceedings below. The spot where the throne stood is marked by a round green stone.

During the rule of Sultan Murad III, two giant marble lustration urns carved from single blocks of marble were brought from Pergamon.

Hagia Sophia contains a marble door located in the southern upper gallery. The attendants at the synods used the door for entering and leaving the meeting.

A column, known as the wishing column, perspiring column, sweating column or the crying column with a hole in the middle covered with bronze plates is located in the northwest of the building. It is said that the column is moist and possess supernatural powers. It is believed that many illnesses are cured on touching the moisture. 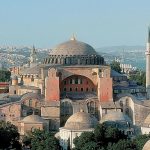 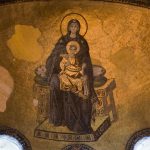 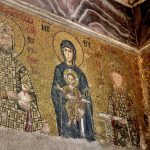 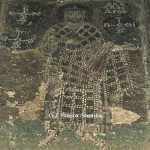 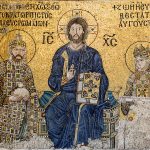 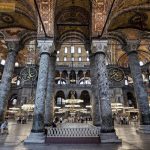 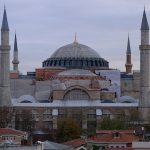 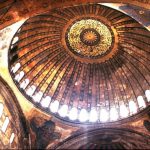 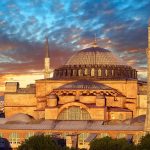 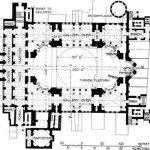 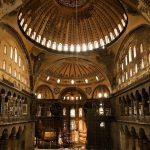 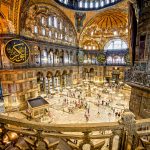 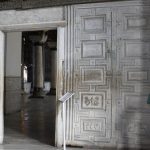 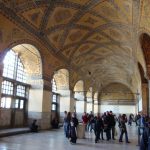 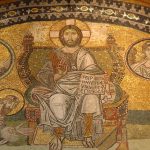 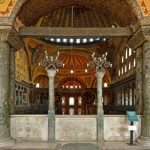 Loge of the Empress 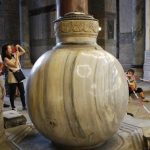 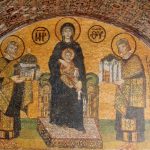 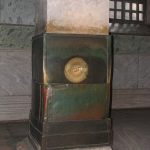 Throughout the centuries, the building was beautified with exquisite mosaics depicting Christ, Virgin Mother, saints, emperors, and empresses. Most of the mosaics date back to the Byzantine Iconoclasm. The golden mosaics were vandalized by the Latin Crusaders during the conquering of Constantinople in 1204.

Located in the tympanum of the imperial gate, it depicts Emperor with a nimbus or halo kneeling down before Christ Pantocrator seated on a jeweled throne offering His blessing. Both sides of Christ’s shoulders are flanked by two circular medallions – on the left side is Archangel Gabriel, holding a staff and on the right is Mother Mary.

It lies in the tympanum of the southwestern entrance, dating back to the reign of Basil II, depicting Virgin Mary seated on a throne, feet on a pedestal adorned with precious stones. On her lap sits child Christ offering His blessing. Virgin Mary is flanked by Emperor Constantine and Emperor Justinian I.

This mosaic is located at a higher level on the half dome of the apse depicting Mary seated on a throne with Child Christ on her lap and feet on a pedestal.

It is located on the second floor in a dark corner of the ceiling portrays Emperor Alexander in a regal mood with a scroll in his right hand and a globus cruciger in his left.

This mosaic lies on the eastern wall of the southern gallery dates back to the 11th century. It portrays Christ Pantocrator dressed in dark blue robe seated in the middle offering His blessing. Constantine IX Monomachus and Empress Zoe stands on his side.

It is also located on the eastern wall of the southern gallery depicts Virgin Mary clad in a dark blue gown typical of Byzantine art holding Child Christ on her lap. She is flanked by Emperor John II Comnenus and Empress Irene.

It was commissioned to mark the termination of Hagia Sophia as a Roman Catholic Church and return to the Orthodox faith. It depicts Virgin Mary and John the Baptist both in three-quarter profile, pleading intercession of Christ Pantocrator for humanity on Judgement Day.

The mosaic features many saints depicting Saints John Chrysostom and Ignatius the Younger standing, draped in white robes with crosses, with richly jeweled Holy Bibles in the hands.