Little Hagia Sophia, formerly known as the Church of the Saints Sergius and Bacchus is one of the most significant buildings of the early Byzantine period in Istanbul, Turkey. It now functions as a mosque. It was originally built as a church by the Byzantine Emperor Justinian. Legend has it that during the reign of Justin I, his nephew Justinian was found guilty of plotting against the throne and sentenced to death, but escaped punishment after Saints Sergius and Bacchus asserted Justinian’s innocence before Emperor Justin. Justinian was absolved and given back his title of Caesar. In an act of gratitude, Justinian promised to dedicate a church to the saints once he ascended the throne.

The construction took place between 527 and 536 AD, a little earlier than Hagia Sophia and the church was considered as one of the most important religious structures in Constantinople. The architects involved were same as that of Hagia Sophia – Isidorus of Miletus and Anthemius of Tralles.

The church was converted into a mosque during the reign of Bayezid II after Ottoman rulers conquered Constantinople in 1453. The church got a portico and a madrasah during that time. In 1740, Hacı Ahmet Paşa included a fountain and restored the mosque. The building was damaged by earthquakes in 1648 and 1763 and was repaired under the reign of Sultan Mahmud II in 1831.

The exterior masonry comprises bricks sunk in thick beds of mortar with walls reinforced by small stone blocks. The central plan of the building has the shape of an octagon inscribed in a non-uniform quadrilateral. It is capped by a majestic dome in sixteen sections with alternating eight flat and eight concave sections, standing on eight polygonal pillars.

The narthex lies on the west side opposite to antechoir while the central nave is expanded by the exedrae on diagonal axes. Colorful columns adorned the ambulatories from the nave and a light and shadow contrast on the sculpture of capitals and entablature. In the front of the building lies the portico which replaced the atrium and a court with a small garden. The area also includes a fountain for the ablutions and several small shops. 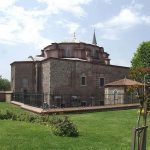 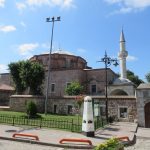 Inside of Little Hagia Sophia 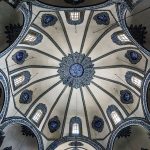 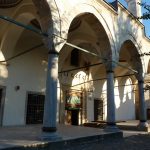 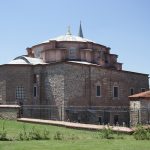 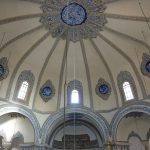 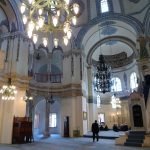 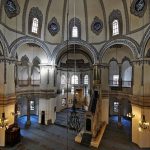 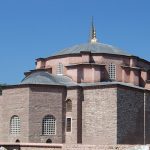 Its interior comprises a two-storey colonnade running along the north, west, and south, bearing a graceful inscription in twelve Greek hexameters dedicated to the Emperor Justinian and his wife, Theodora, and Saint Sergius, the patron-saint of the soldiers of the Roman army. The columns are made of alternating verd antique and red Synnada marble – 16 in the lower story and 18 in the upper. Many column capitals still contain the monograms of Justinian and Theodora.

The original interior decoration of the church was lost after the building got transformed into a mosque.