The Cathedral of Lima (Spanish: Catedral de Lima) is a huge Baroque cathedral devoted to the Evangelist and Apostle St John. The construction of this Roman Catholic cathedral started in 1535 when the Spanish conqueror Francisco Pizarro established the foundation stone. Situated in the Main Square of downtown Lima, the Basilica Cathedral has undergone numerous transformations and reconstructions since its inception. Despite numerous renovations and expansions, it has managed to retain its façade and colonial structure. After the completion of the original adobe church in 1538, Francisco Pizarro officially inaugurated it on March 11, 1540. In 1546, it was recognized as a Metropolitan Church with The Kings becoming its Archdiocese. During the 17th century, the church was damaged now and then by several earthquakes, entailing numerous works of restoration. The church vaults and pillars were destroyed by a big earthquake in 1746, which called for reconstruction. The repaired Cathedral was inaugurated in two parts in 1755 and 1758. It was again renovated internally in the late 19th century.

The front façade, in accordance with most other cathedrals, has three huge doorways. Over the central gateway (also called the “Portada del Perdon”) lies the Peruvian seal with a phrase “Plus Ultra”. The two towers with the steeple of slate exhibit neoclassical style with North European and El Escorial influences.

One of the 14 side chapels leads on to the “Calle de Judios” while another one to the “Patios de los Naranjos”. The front façade contains figurines of the Apostles with the Sacred Heart of Jesus positioned in the middle. The Archbishop’s Palace and the Parroquia del Sagrario are situated next to the Cathedral. 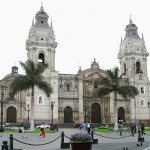 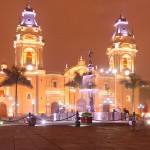 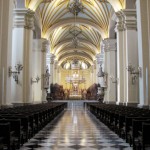 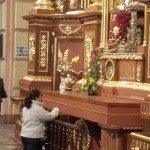 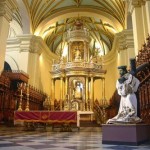 Cathedral of Lima Inside 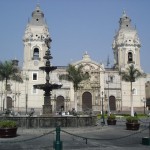 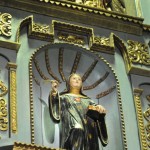 Cathedral of Lima Via Crucis 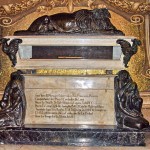 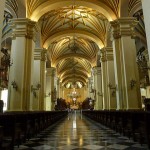 Inside of Lima Cathedral 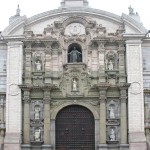 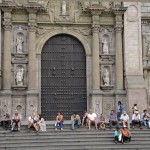 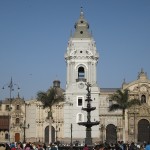 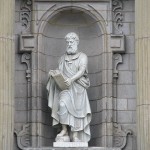 Next to the side aisles there is a series of large images called the “Via Crucis” that depicts various events when Jesus Christ was crucified. Several signs are observed at the entrance commemorating the visit of Pope John Paul II in 1985 as well as in 1988. The ancient baptistery can be seen inside the first chapel in the left walkway. Some of the main attractions of the interior include the vaulted ceiling, the checkerboard floor, the gold-plated altar, and the wooden choir stalls featuring carvings of virgins, apostles, and saints.