The Archbishop’s Palace (called Palacio Arzobispal in Spanish), situated in the Plaza de Armas or the Plaza Mayor in Lima’s Historic Centre, is a notable building where the Roman Catholic Archdiocese of Lima and the Cardinal’s offices are headquartered. Moreover, the palace serves as the dwelling place of the Archbishop of Lima. This historical structure reflects the spiritual significance of the adjoining Cathedral of Lima and its extensive authority during the Colonial era.

The old palace building was constructed shortly after the city of Lima was founded in 1535. It was raised on the place of the Municipal Palace of Lima when the latter was shifted to its present position across the square. The original structure featured six balconies with different designs and numerous entrances. The coat of arms was displayed on top of the main gate. The courtyard’s architectural style and characteristics resembled those of the city’s several cloisters. While the façade was destroyed in the 19th century, the rest of the building was demolished before the current structure was constructed.

Opened in 1924, this remarkable structure stands as a witness to the neo-colonial architectural style that developed in Peru during the 20th century. Ricardo de Jaxa Malachowski, the famous Polish Peruvian architect, is credited for designing this amazing new building. He used the Palace of Torre Tagle as the standard for comparison and evaluation. Some of the finest materials like bronze, marble, tiles, mahogany and cedar wood were brought for its construction.

The façade consists of beautiful baroque elements and ornaments carved out of reintegrated rock. Two stunning wooden balconies with amazing artworks are found above the main doors. Apart from a granite figure of Saint Turibius of Mongrovejo, the palace has two flagpoles for the Peruvian and the Vatican flags. 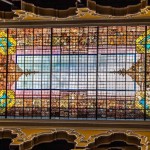 The palace is divided into three floors, the first story being used for exhibitions showcasing cultural and religious items. The ornate interior features a figurine of Santa Barbara, and the ceiling is decorated with stained glass windows letting in plenty of light. The second floor with its antique paintings, furniture, and other decorations can be accessed via the marble staircase that is adorned with wooden handrails. The third story is used for storing historical documents of the Cathedral.