Covered in flamboyant Gothic stonework, the Rouen Cathedral is an ancient Roman Catholic cathedral located in the city of Rouen in the Normandy region of France. The Cathedral is the Archbishop of Rouen’s area of ecclesiastical jurisdiction. It is overlooked by three towers including the Tour Saint-Roman (built: 12th century) containing the 64-bell carillon, utilizing 36 tons of bronze and iron; the 250 ft tall Tour de Beurre (built: 16th century), and the Tour-Lanterne (built: 19th century). At the cathedral site in Rouen, there was a church built by Bishop Victricius during the late 4th century. The building was destroyed during the Viking invasion in the 9th century, but it was rebuilt and enlarged by Richard I, the grandson of Viking leader Rollo. The consecration of the church in 1063 was done in the presence of William I.

Based on the Gothic style at Saint-Denis Basilica in Paris, the cathedral was reconstructed in 1145 by Hugh of Amiens. In 1200, a devastating fire ruined most parts of the cathedral except the Saint-Romain tower, the left portal, and the nave arcades. The remainder of the church building and the choir were rebuilt in a more matured 13th-century Gothic style.

The cathedral in Rouen was given a makeover during the 15th century when the Butter Tower was added, and the façade, as well as the upper parts of the left tower, were renovated. Over the years, other spires and towers were added, the most notable being the Lantern Tower. The cathedral, despite being bombed several times during the WWII, narrowly escaped complete destruction. It sustained heavy damage as the Saint-Romain Tower was burnt, the bells were melted, the south aisle was ruined, and two rose windows were destroyed. 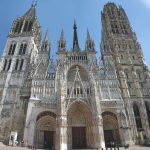 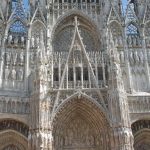 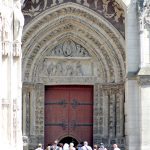 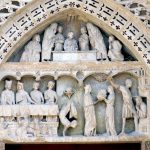 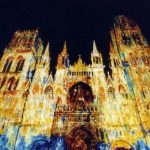 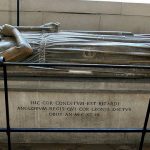 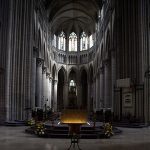 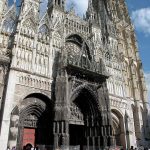 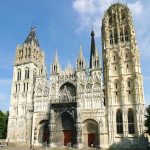 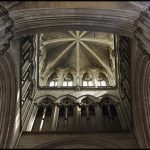 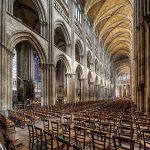 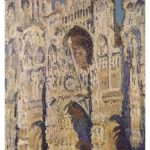 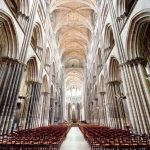 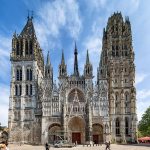