Jardin du Luxembourg, one of the most important historical gardens in Paris, is located close to the Latin Quarter. The 55-acres (23 hectares) park, owned by the Senate of France, is home to several lawns, fountains, flowerbeds, model sailboats, and tree-lined promenades. The garden offers plenty of attractions and lots of variety to children, adults, students, and tourists. Originally possessed by the Duke of Luxembourg, the site was purchased by Marie de’ Medici in 1611. She chose to construct a palace in resemblance to the Pitt Palace in Florence. Salomon de Brosse, one of the most influential French architects was commissioned for the task. A year later, Medici planted around 2,000 elm trees. She hired a group of gardeners, including Tommaso Francini, akin to the one she had seen in Florence as a child. Along the edge of two terraces, a row of balusters topped with rails; an elevated flowerbed along the center of the chateau was laid out by Francini. The garden originally had an area of 8 hectares, but Medici bought additional land expanding it to 30 hectares. She assigned the work of gardening to Jacques Boyceau de la Barauderie. He designed the garden in formal French garden style with rectangular flowerbeds in front of the Luxembourg Palace as well as a sequence of squares laid out along the east-west alley. Even though the garden was largely neglected by the later monarchs, the French Directory leadership confiscated the neighboring land belonging to Carthusian monks, enlarging the Luxembourg Garden to 40 hectares. The garden was restored by the famous architect Jean Chalgrin.

The Luxembourg Garden, a formal garden of gravel with its several statues and an octagonal water basin at the center, is known for its peaceful atmosphere. Many statues of French saints and queens surround the basin. An orchard of pear and apple trees along with a puppet theater is located in its southwest corner. The gardens are also home to a vintage carousel and a fenced-in playground where young children can have a good timer with their parents. There is an orangery displaying sculptures, art, and photography. 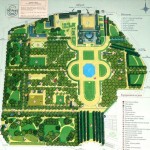 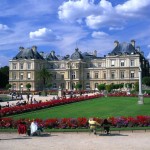 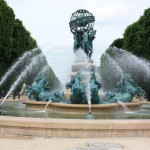 Fountain of the Observatory 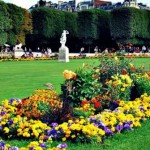 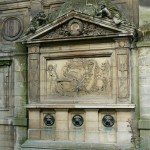 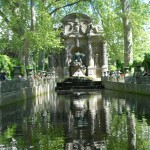 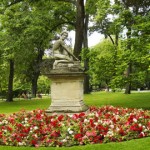 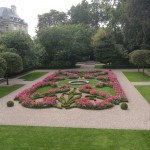 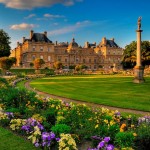 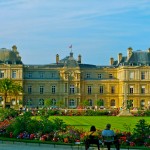 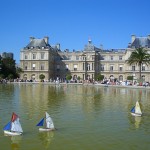 Jardin du Luxembourg Pool in Front of the Palace 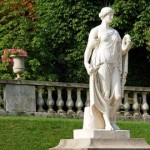 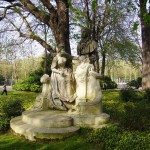 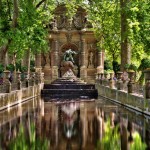 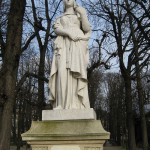 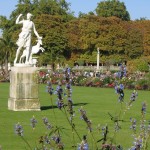 La fontaine Medicis (Medici Fountain) designed in 1630 by the Florentine hydraulic engineer and fountain maker Tommaso Francini is the most noteworthy among all the fountains in the garden. The grotto fountain was ruined in the 18th century though it was restored to its previous state by Jean Chalgrin in 1811.

A wall fountain known as Fontaine de Leda featuring a bas-relief representing the mythical story of Leda and the Swan was designed by Achille Valois during the reign of Napoleon. It was shifted to the Jardin du Luxembourg in 1866.

The southern end of the garden features the Fountain of the Observatory installed in 1867 by Gabriel Davioud. Cast in bronze, the fountain has garland and festoon carvings by Louis Vuillemot, carved armillary with an interior globe by Pierre Legrain, figures of spouting fish, turtles, and horses by Emmanuel Fremiet, and sculptures of four women carrying the globe by Jean-Baptiste Carpeaux.

The Luxembourg Gardens consist of hundreds of monuments and statues with the central space being surrounded by a group of statues of the Reines de France et Femmes illustres (Queens of France and Famous Women) commissioned in 1848 by Louis-Philippe.