Palais Garnier, the 19th-century Opera House in Paris with a seating capacity of 1,979 people, is one of the most charming opera houses in the world. Known for its opulence and architecture, the Palais Garnier is an iconic structure in the city being used mostly for ballet. It was the inspiration for Gaston Leroux’s novel The Phantom of the Opera as well as its subsequent adaptations in musicals and movies. Le Palais Garnier is also home to the Paris Opera Library-Museum (Bibliotheque-Musee de l’Opera de Paris). A temporary building called the Salle Le Peletier was home to the Opera de Paris since 1821. However, a permanent building for the Opera had been desired since its inception. On January 14, 1858, Emperor Napoleon III was attacked by Italian anarchists while he was on his way to the Opera. Following the attempted assassination, the Emperor made the decision to construct a new, more secure state-funded opera house. The site for the proposed building was designated by a royal decree on September 29, 1860.

An international design competition for constructing the opera house was officially announced on December 30, 1860. Among the 171 architects who participated in the competition, Charles Garnier was declared the winner. His project was selected mainly because of its beautifully distributed plans as well as the large, imposing sections and facades. While the excavation took place during 27 August-31 December, the foundation was laid on January 13, 1862. Since the level of groundwater underneath the basement was unexpectedly high, a popular myth came up that the structure was constructed over an underground lake.

The southern end of the building features the principal façade that rises above the Place de l’Opera. The avant-corps are crowned by two figural groups La Poesie (Poetry) and L’Harmonie (Harmony) while their bases are decorated with multi-figure groups including Perraud’s Lyrical Drama, Carpeaux’s The Dance, Guillaume’s Instrumental Music, and Francois Jouffroy’s Poetry.

It is a group of rooms located on the western side of the Opera Garnier. It was constructed for providing the Emperor a direct access to the building. It is now home to the Paris Opera Library-Museum.

Located on the eastern side, the pavilion allowed the abonnes (subscribers) access to the interiors. A dome with 13.5m diameter covers the pavilion. 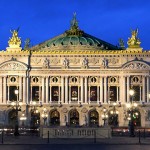 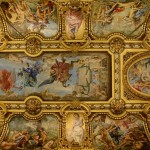 Ceiling of the Grand Foyer with Paintings 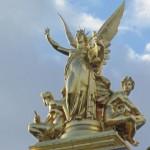 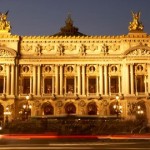 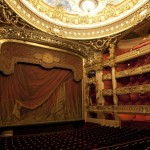 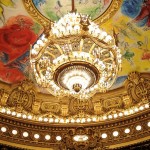 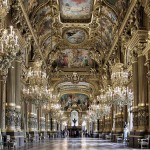 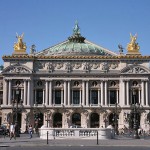 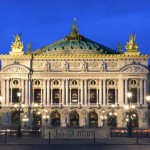 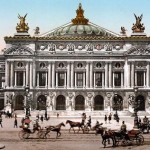 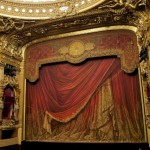 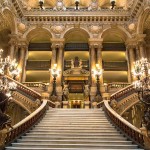 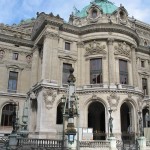 A monumental ceremonial staircase made from white marble has a row of balusters of green and red marble dividing it into two flights of stairs. The staircase has sculptures of female torcheres at the base. Quite a few paintings by Isidore Pils are found on the ceiling.

The grand entrance hall with a height of 18 meters, a length of 154 meters, and width of 13 meters was used as a drawing room. In 2004, the hall was repaired and refurbished.

The auditorium with its horseshoe shape has a seating capacity of more than 1900 people. This grand auditorium, being one of the largest stages in Europe, can accommodate around 450 artists at a time. The ceiling area originally had paintings by Jules-Eugene Lenepveu, but a new ceiling with Marc Chagall’s paintings was installed over the original in 1964.

The 7-ton central chandelier in the auditorium, made with Bronze and crystal, was designed by Charles Garnier. It is one of the most outstanding features of the opera house.