It was in memory of Cardinal Wiseman, the first Archbishop of Westminster who died in 1865, that a sum of money was raised for the cathedral. The successor of Wiseman, Cardinal Manning acquired the land in 1884. After two failed attempts in 1867 and 1892, construction began in 1895 under Cardinal Vaughan – the third archbishop and Manning’s successor. John Francis Bentley being the architect, the structure was heavily influenced by Byzantine architecture.

A year after Bentley’s death, the cathedral was opened in 1903. Cardinal Vaughan’s Requiem was one of the first public services that were held in the cathedral. Economical reasons halted the decoration of the interior which delayed the consecration. According to the Catholic laws prevailing at that time, a place of worship could be consecrated only if it is free from debt and having its fabric completed. It was in June 1910 that the consecration took place although the interior was unfinished.

The building having a floor area of around 5,017 square meters comprises a campanile, a spacious and uninterrupted nave which is about 18 meters wide and 70 meters long covered with domical vaulting. The main piers and the diagonal arches supporting the domes segregate the nave into three bays each around 395 square meters.

The cathedral’s eastern termination reflects the Romanesque style. The main structural parts of the building are composed of brick and concrete while the exterior is adorned with white stone bands with red brickwork. The most noteworthy feature of the façade is the deeply recessed arches flanked by stairway turrets and tribunes. Byzantine type marble columns support the galleries and other ancillary parts of the building.

The cathedral’s most prominent feature of decoration is the baldacchino over the high altar. With a width of 9.5 meters and height of 11.5 meters, it is one of the largest structures of its kind. The crypt emerges behind the baldacchino. A smaller chamber opens out of this crypt directly under the high altar which contains the remains of Cardinal Wiseman and Cardinal Manning – the first two Archbishops of Westminster.

The most noteworthy chapels are the chapel of the Blessed Sacrament and the Lady Chapel located on the north and south side of the cathedral respectively. They are 6.7 m wide, of great stature, comprising open arcades, apsidal ends and barrel vaulting. The chapels are entered from the transepts. The other chapels include the chapel of Saints Gregory and Augustine. 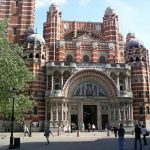 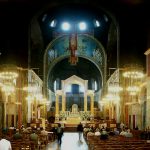 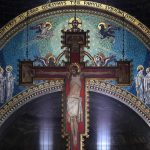 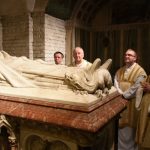 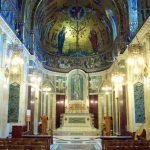 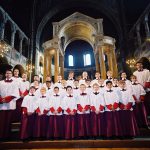 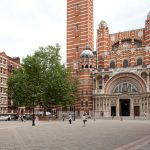 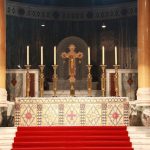 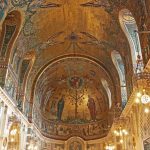 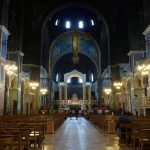 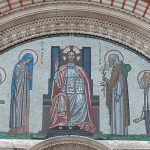 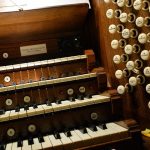 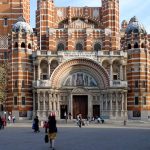 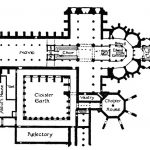 When John Bentley, the architect of the cathedral died, it did not have any completed mosaics. Bentley left behind some few precious sketches and designs. Consequently, a cathedral committee was established for the inclusion of mosaics;, the style, and subject of which were influenced by designers as well as donors. During 1912–1916, the devotees of the Arts and Crafts Movement installed some mosaics including the chapel dedicated to Saint Andrew. Mosaicist Gertrude Martin supervised by An ing Bell and Marshall installed mosaics in the Lady Chapel who also designed the mosaic of Christ Enthroned located above the entrance.

The other mosaics include one representing St Thérèse of Lisieux placed in the south transept, a mosaic in memory of members of the Royal Army Medical Corps who died in Second World War placed in the chapel of Saint George both installed in 1952.  There were some pale pink mosaics installed during 1960- 1962. Some mosaics depicting different moments in the life of Paul under the supervision of designer Boris Anrep installed in the chapel of Saint Paul during 1964-1965.A mosaic which is an inscription was placed above the northwest entrance. The mosaic of Saint Patrick was installed at the entrance in 1999. In 2001, designer Christopher Hobbs installed the mosaic of Saint Alban which drew inspiration from the style of early Byzantine iconography. The designer Hobbs was also credited with the mosaics of Holy Family in 2003 and men working on Westminster Cathedral in 2006 installed in the chapel to Saint Joseph.

The mosaic of Saint Patrick was installed at the entrance in 1999. In 2001, designer Christopher Hobbs installed the mosaic of Saint Alban which drew inspiration from the style of early Byzantine iconography. The designer Hobbs was also credited with the mosaics of Holy Family in 2003 and men working on Westminster Cathedral in 2006 installed in the chapel to Saint Joseph.

The Westminster Cathedral Choir, regarded as one of the finest in the world, is the only cathedral choir to sing daily Mass and Vespers. The choir comprising up to twenty-five boy trebles and altos and ten professional Lay Clerks also perform concerts at home and abroad.

The cathedral houses burials of many Archbishops of Westminster and some dignitaries including the Russian ambassador Alexander count Benckendorff.