Located in Cheshire in England, Lyme Park is an estate consisting of an imposing mansion that is surrounded by scenic gardens. This historic mansion, being one of the largest and most important buildings in Cheshire is listed as a “Grade I” structure in the National Heritage List for England. In January 1398, the estate at Lyme Handley was given over to the Legh family by Richard II who was the son of Edward, the Black Prince. The land remained in their possession up until 1946, and since then the estate has been managed or looked after by the National Trust. Works on building the present mansion started under Piers Legh VII, during the 16th century.

In the 1720s, an architect Giacomo Leoni made some modifications by adding the south range and the courtyard to the existing Elizabethan features. In the 1800s, Lewis Wyatt made further modifications to the interior. The period during 19th-20th centuries saw major changes as formal gardens were developed.

The magnificent mansion measures 58 m (190 ft) by 40 m (130 ft) round the courtyard. Its exterior is made of buff sandstone rubble with works in ashlar sandstone. Having slate roofing, the house features a symmetrical north face with 15 bays, the central bay containing an arched doorway with Doric columns. The symmetrical three-storied south front with 15 bays overlooks the pond.

In the eastern range, its interior is characterized by the Entrance Hall that was modified by Leoni. A screen of Ionic columns and large pilasters are found in the asymmetric Hall, which has the Library and Wyatt’s Dining Room to its south and the east respectively. Two Elizabethan rooms – the Stag Parlor and the Drawing Room are located to the north.

Surrounding the house, there are acres of formal gardens. A lawn sloping down from the southern side of the house leads to the small ravine featuring a stone bridge, the place commonly referred to as Killtime. The Dutch Garden containing flower beds and a fountain is situated at the western side of the lawn. 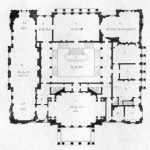 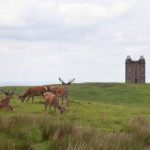 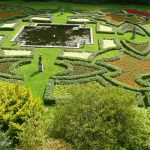 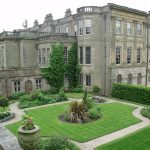 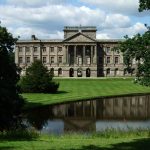 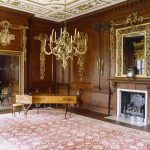 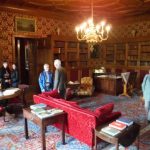 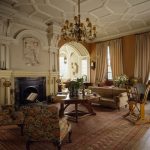 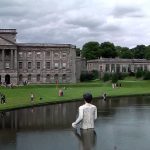 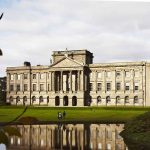 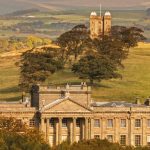 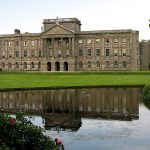 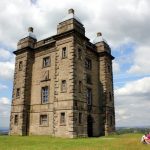 The Cage at Lyme Park

A park measuring 550 hectares of land was fenced in the 1500s by Piers Legh I. Avenues of lime and sycamores were planted by Richard Legh in the 17th century, and then a massive tree-planting initiative by Peter Legh XII gave the park its present appearance. Red deer, Highland cattle, sheep, and fallow deer are commonly seen foraging.

It is a hunting tower situated on the hill located to the eastern side of a road approaching the house. First built in 1580, and then reconstructed in 1737, the hunting lodge was also used as a prison as well as a cottage for the park keeper.