In 1946, the Methodist Central Hall was the venue of the first meeting of the United Nations General Assembly. In return for the usage, the Assembly voted to bear the cost of repainting the walls of the church – the light blue paint used is still visible.

Political rallies were regularly held in the central hall which included many eminent speakers such as M. K. Gandhi, Winston Churchill and Martin Luther King, Jr.

In 1968, the Central Hall was the venue for the first public performance of Andrew Lloyd Webber’s Joseph and the Amazing Technicolor Dreamcoat. The concert also featured Andrew Lloyd’s father organist William Lloyd Webber who was the Musical Director at Methodist Central Hall and his brother cellist Julian Lloyd Webber as well as John Lill, the pianist.

In 1972, the Conservative Monday Club organized a much-publicized “Halt Immigration Now!” public meeting in the packed Central Hall addressed by several luminaries including members of parliament. The club continued to use the building till 1991 when two seminars were held.

The FIFA World Cup trophy was exhibited at the Central Hall in early 1966 in view of the soccer tournament that took place in England that summer. The trophy was stolen in March; however, it was recovered seven days later in South London.

The hall was also used for public enquiries. 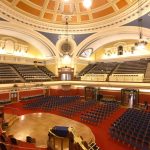 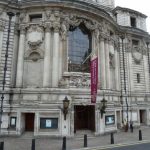 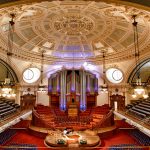 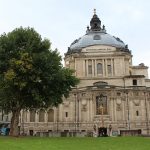 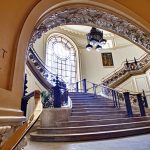 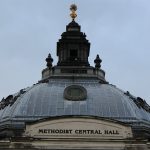 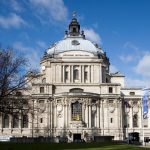 Edwin Alfred Rickards designed and planned the Methodist Central Hall on a Piranesian scale. It is an early example how reinforced concrete frames were used in Britain.

The original design of 1904 included two small towers on the main façade, but it was never built.

The domed ceiling of the main Hall happens to be the second largest of its type in the world.

Henry Poole designed the angels in the exterior spandrels.