Theater of Dionysus had great significance for the people of ancient Greece, and it is considered today as the prototype of all Greek theaters. Built on the southern slope of Acropolis, the theater is regarded as the birthplace of Greek drama. Dedicated to Dionysus, the God of drama, the theater could accommodate 17000 people with brilliant acoustics. It was built in stones and was the first of its kind to be ever built and staged dramas by Greek tragic poets like Aeschylus, Euripides, and Sophocles. The theater has undergone reconstruction many times since its foundation.

The site of the theater was known since the 1700s. Excavation work was started by Greek Archaeological Society in 1838 and it was carried out throughout the 19th century. Remains of few stone blocks were the only evidence of this theater. The cult of Dionysus Eleuthereus in the area dates back to 6th century B.C. under the rule of Peisistratus and his successors.

During the 6th century B. C., performances relating to the festivals of Dionysus were staged most probably in the Athenian agora. The audiences were seated on wooden bleachers (called ikira) which collapsed during the early 5th century B.C. After the collapse of the stands, the stage shows were shifted to the area around Dionysus on the slope of the Acropolis.

Wooden structures were replaced with stone at the end of the 5th century B.C. The present general state of the theater of Dionysus can be largely attributed to the times of Athenian statesman Lycurgus in charge of city’s finances and building programs who reconstructed the theater in stone in monumental form. 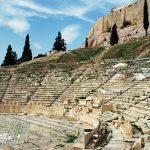 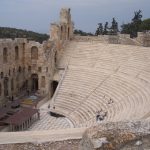 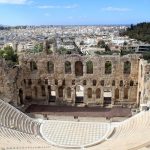 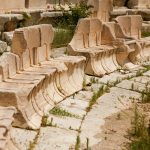 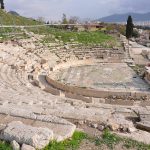 Theatre of Dionysus Side View 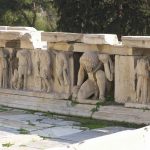 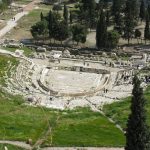 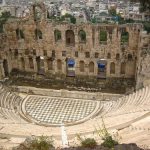 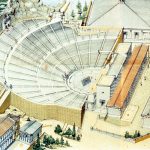 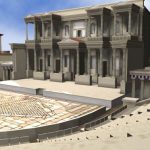 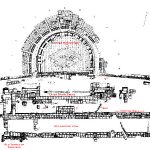 During the Hellenistic period, 67 marble stones were constructed around the circumference of the stage with names of the dignitaries inscribed who occupied them. An imposing marble stand was reserved for the priest of Dionysus at the center of the row of seats.

The theater was modernized during the Roman era although the theater retained its Greek originality. A new stage was dedicated to Roman Empire Nero and Dionysus. The floor of the stage had been refurbished with marble slabs, and new honor seats were constructed around the edge. At the site, remains of renovated and redesigned version dating back to Roman times can still be seen today.