Acropolis of Athens is a famous citadel signifying the artistry of ancient Greek civilization. It lies on a hill above the city of Athens and houses remains of several ancient buildings and monuments of great historical and cultural significance – the most famous among them is the Parthenon. Although there are other Acropolises in Greece, the Acropolis of Athens stands out and is referred to as “The Acropolis.” The Acropolis is situated 150m above sea level and stands on a surface area of 7.4 acres.

It was during the 5th century BC that Pericles (495 – 429 BC) initiated the construction of some of the most important buildings at the site which includes the Parthenon, the Propylaia, the Erechtheion and the Temple of Athena Nike. The Acropolis was also called Cecropia – named after the first Athenian king, Cecrops.

The earliest artifacts date back to the Middle Neolithic Era as the Attica was inhabited from the Early Neolithic Age as per historical documents. A megaron, belonging to the Mycenaean Greece, stood upon the hill during the late Bronze Age. Only a single limestone column-base and remains of sandstone steps of the megaron survived.The construction of the palace was followed by a massive Cyclopean wall which served as a defense for the Acropolis up to the 5th century. However, conclusive evidence is lacking about the existence of the palace on top of the Acropolis of Athens. However, if the palace existed, it might have been replaced later by other building activities.

The construction of the palace was followed by a massive Cyclopean wall which served as a defense for the Acropolis up to the 5th century. However, conclusive evidence is lacking about the existence of the palace on top of the Acropolis of Athens. However, if the palace existed, it might have been replaced later by other building activities.

Many temples were constructed at the site during this era. A temple dedicated to Athena Polias was constructed during 570–550 BC. The most notable among them is the Old Temple of Athena, which was built between 529–520 BC by the Peisistratids, stands between the temples of Erechtheion and the Parthenon. Gradually, the Acropolis acquired a sanctified character. In 480 BC, the temple was destroyed during the Persian invasion along with the older Parthenon which was also burned and looted.

Many existing buildings at the site damaged by age and war were repaired during the Hellenistic and Roman periods. Monuments dedicated to foreign kings especially those of the Attalid kings of Pergamon Attalos II were built in front of the northwest corner of the Parthenon, and Eumenes II, in front of the Propylaia. The walls of the acropolis were repaired due to the threat of a Herulian invasion, and another gate was erected in front of the Propylaia to restrict entrance, eventually turning the Acropolis to its original form to use it as a fortress. 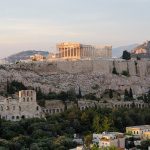 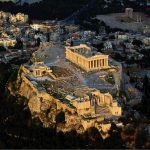 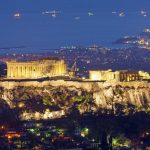 Acropolis of Athens at Night 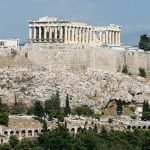 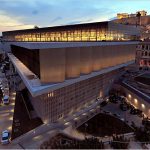 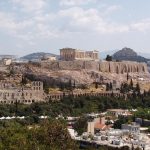 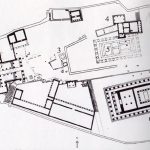 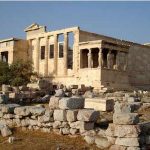 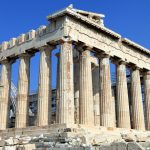 The Parthenon was transformed into a church dedicated to the Virgin Mary in the Byzantine era. The Acropolis was the seat of the city’s administrative hub while the Parthenon became its cathedral and the Propylaia served as part of the ducal palace. A large Frankish tower was built but demolished in the 19th century.

The Parthenon was used as the army headquarters of the Turkish army after Greece was conquered by Ottoman Empire while the Erechtheion became the private harem of the Governor. During the Morean War, the buildings of the Acropolis suffered noticeable damages, as the Parthenon was hit by artillery fires.

In the following years, Acropolis was the hub of bustling activities flooded with Byzantine, Ottoman, and Frankish structures.  A very surprising feature during the Ottoman era was a mosque with a minaret inside the Parthenon. After the Greek War of Independence, the additions made during the Byzantine, Ottoman, and Frankish periods were cleared from the site in order to regain the original form of the complex.