Wat Phra Si Sanphet is one of the most significant historical sites in Thailand. Once considered the holiest temple in ancient Thailand, it has served as a spiritual center among the natives of Thailand for a long time. Since the monastery was built within the premises of royal palace grounds, no monks were allowed to reside. It was only used for royal ceremonies and rituals. Wat Phra Si Sanphet was situated in Ayutthaya – the ancient capital of Thailand till 1767 when the Burmese invasion destroyed the city in that very year. The temple was destroyed. The Burmese looted numerous temples including Wat Phra Si sanphet.

In 1350, King U-thong, also known by the name of King Ramathibodi I started the construction of a royal palace in the area where the temple is situated today. The palace was completed in 1351 and King Ramathibodi made Ayutthaya the capital of his kingdom. The palace encompasses three wooden structures named “Phaithun Maha Prasat”, “Phaichayon Maha Prasat”, and “Aisawan Maha Prasat”. In 1448, a new palace was built further north by King Borommatrailokanat, who then transformed the old palace grounds into a holy site. In 1492, the son of king Borommatrailokanat, king Ramathibodi II built two stupas which are known as Chedis in Thailand, where his father’s and brother’s (king Borommaracha) ashes were buried. In 1592, another Chedi was built under King Borommaracha.

Restoration work was first carried out under Somdet Phrachaoyuhua Borommakot.

A viharn was erected in 1499 on the palace grounds which was called “Vihara Luang”. 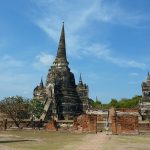 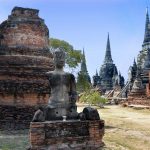 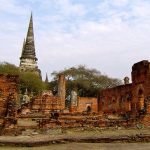 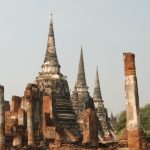 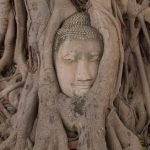 The Head of Buddha in Wat Mahathat 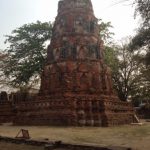 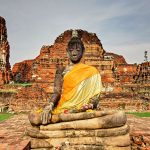 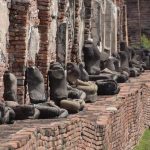 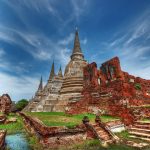 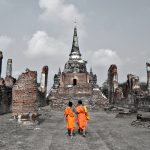 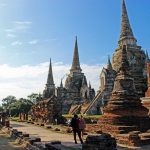 During the rule of Ramathibodi II, a huge image of Buddha was cast and kept in the assembly hall. It was known as “Phra Si Sanphetdayan” and was the primary object of worship. Its height was 16 meters, and the surface contained 343 kilograms of gold coating.  The core of the sculpture was made of bronze and weighed around 64 tons. It took more than three years to build the statue. In 1767, when Burmese invaded Ayutthaya, the edifice and  was severely damaged, and the gold coating was melted away.

Prior to destruction, the temple was an imposing structure. The three Chedis which are the only ones to be restored are still preserved. The Chedis are built in classic Ceylonese style that reminds of a bell. A cloister encompasses the terrace of the Chedi and a hall was built for each in the east and west. The building in the east was the Viharn Luang – the largest building of the temple. The building houses the statue of Phra Si Sanphet Phuttha, from which the name of the temple was derived.

Symmetrically there were four other halls around the viharn luang. To the north stood a smaller viharn, housing the 10m high statue of Phra Phuttha Lokanat. The Phra Chom Thong Tinang Throne Hall occupies the east front. Pa Le Lei probably contains a seated Buddha satue which stood symmetrically to the south of viharn luang. The entire complex contains a high perimeter hall, the temple can be accessed by four gate passages running in four directions. There were small Chedis and low pavilions along the wall.  Some of the small Chedis still stands today.