The Grand Palace, a large complex of buildings located at the center of Bangkok, has been the home of the Monarchy of Thailand since 1782. The rectangular riverside palace complex with a total area of 218,400 sq m is situated in the Thai district of Phra Nakhon. The palace includes several buildings, halls, courtyards, gardens, and pavilions with open lawns.

Until 1925, the palace was the official seat of the king, his royal court, and the government. Though the present King of Thailand Bhumibol Adulyadej (Rama IX) uses Chitralada Palace as his residence, the Grand Palace still holds state functions and royal ceremonies every year. After King Buddha Yodfa Chulaloke (Rama I) took possession of the crown from Taksin (the ruler of Thonburi), he wanted to relocate the capital city of Thailand to Bangkok and establish it as the new seat of power for his Chakri Dynasty. The creation of the Grand Palace was initiated in May 1782, at the royal decree of King Rama I. The royal residence was shifted from the Derm Palace to the Grand Palace in June 1782 when the King formally moved into the new residence. The Grand Palace was initially constructed of wood because of shortage of funds and building materials, but the wooden structures including the royal residences, forts, gates, and throne halls were later rebuilt with stones and bricks. Some of the materials were taken from the old city of Ayutthaya that was ruined by the Burmese-Siamese War in 1767. These were ferried across the Chao Phraya River by large cargo boats and eventually used for constructing the palace. The palace complex was increased in size, extending up to the Wat Pho, under the rule of Buddha Loetla Nabhalai.

Temple of the Emerald Buddha

Inside the palace complex is situated a royal chapel that is known as the Wat Phra Kaew. The chapel has architectural similarities to a Buddhist temple, but it does not have the residences for monks. Constructed in 1783, the Wat Phra Kaew is detached from the royal quarters conforming to the ancient traditional architecture seen in the historic temples of Wat Phra Sri Sanphet and Wat Mahathat Yuwaratrangsarit. The temple, enclosed by walled cloisters on its four sides, has seven different entrances. It houses the Emerald Buddha, a jade statuette of the Buddha meditating in yogic posture. 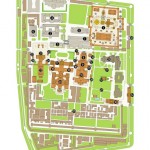 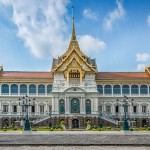 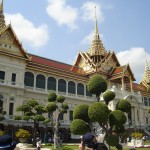 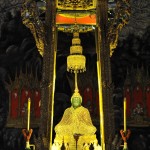 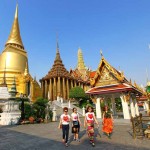 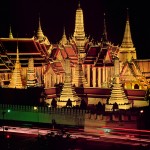 Grand Palace of Thailand at Night 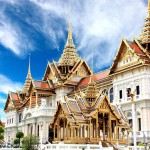 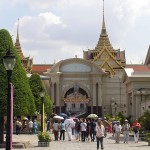 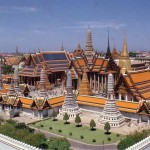 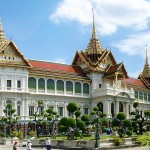 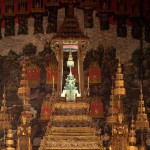 Inside of Temple of the Emerald Buddha 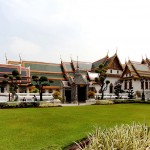 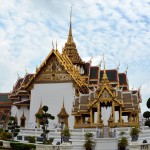 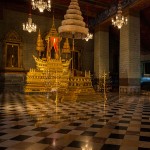 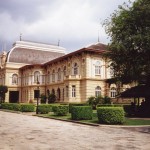 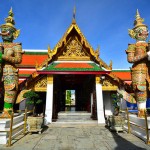 Temple of the Emerald Buddha

Apart from the temple, the palace is divided into other buildings including

Museum of the Emerald Buddha Temple