The historic Turtle Tower, known as Tháp Rùa in Vietnamese, is a small tower standing on an islet in the middle of Hoan Kiem Lake in Hanoi. It is believed that the structure was erected to commemorate one of the greatest heroes of Vietnam, Le Loi, who founded the Le dynasty. Even though the tower is in a state of disrepair, it is still viewed as a symbol of peace, harmony, and patriotism by the people of Vietnam. Initially, the small islet featured the Ta Vong Temple that was built during the 17th-18th century by the Trinh rulers. However, it disappeared during the reign of the powerful Nguyens. The foundation of the tower traces back to the end of the 19th century when Vietnam was controlled by the French forces.

A Vietnamese bureaucrat working for the French government received permission to construct a tower in memory of Le Loi, a warrior who led the Vietnamese people to victory against the forces of Ming dynasty in the 15th century. Legend has it that Le Loi was endowed with great strength by a mystical sword given by Kim Qui (the Golden Turtle God), allowing him to unite the forces and secure victory. It is believed that the sword is now guarded by a magical turtle in the depths of the Hoan Kiem Lake.

When the tower was constructed, the Vietnamese official in charge was involved in a scandal. He secretly tried to bury the remains of his father on the islet, which was considered auspicious as per the customs of feng shui. However, the people were aware of his intentions and so his father’s body was removed. 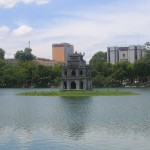 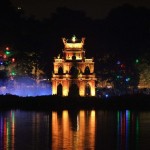 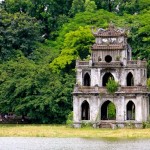 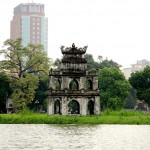 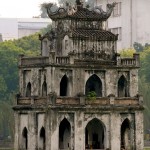 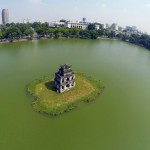 The Turtle Tower has a unique combination of local Vietnamese and French colonial architecture. The three-storied tower is constructed on a large heap of land measuring 350 square meters. It gradually narrows to the top since its first two stories are larger than the third. The ground floor, as well as the first floors, has three doors on the eastern and western sides while two doors are found on the southern and northern sides. The first and the top floor are fenced with horizontal and vertical rails.

Atop the Turtle Tower, stood a version of the “Statue of Liberty”, which was placed by the French. However, it was removed when the Tran Trong Kim regime gained control of the city in 1945. During the French rule, the local people would often hang Vietnam’s revolutionary flag from the tower in order to show their defiant spirit.