The Flag Tower (Vietnamese: Cột cờ), a part of the Citadel of Hanoi, is one of the most notable structures in the city. The 33.4 m tall tower, located at the heart in the city, was constructed in 1812 during the rule of Emperor Gia Long.

The 204-year old Flag Tower, unlike most historic buildings in Hanoi, was spared from destruction during French colonization of Vietnam (1894-1897) as it was used by the military. The Vietnamese flag was hoisted for the first time atop the tower in 1945 following the success of August Revolution. On the capital liberation day (October 10, 1954), the Flag Tower’s image was first imprinted on the currency that was issued by the Bank of Vietnam. The pyramid-shaped Flag Tower of Hanoi contains three tiers with a set of spiral staircases that lead to the top. The first tier has a height of 3.1 m and width of 42.5 m; the second tier is 3.7 m high and 25 m wide while the third is 5.1 m high and 12.8 m wide.

There are four doors in the second tier. Vietnamese phrase “Nghênh Húc” (meaning welcome dawn’s sunlight) is engraved on the eastern door; “Hồi Quang” (meaning to reflect light) is inscribed on the western door while “Hướng Minh” (meaning directed to the light) is written on the southern door. The northern door leads to two staircases on the left as well as the right side. 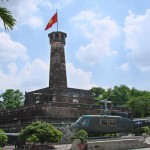 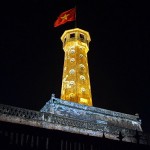 Flag Tower of Hanoi at Night 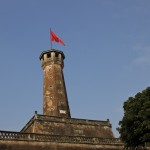 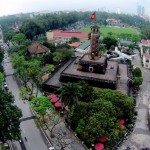 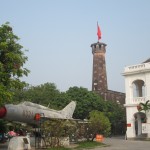 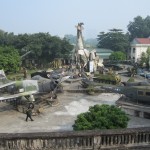 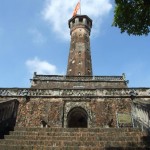 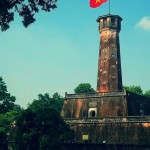 The tower is illuminated by six fan-shaped and thirty-six flower-shaped windows. The national flag flutters on top of the tower and the norm is to use one flag for 2-3 weeks, which means about 20 flags are annually hoisted atop the Hanoi Flag Tower.