The Shwezigon Pagoda, regarded as the prototype of all the stupas in Myanmar, is a cylindrical Buddhist temple situated in the Burmese town of Nyaung-U near the ancient city of Bagan. It features a circular gilded stupa encircled by smaller shrines and temples. The Pagoda is home to ancient Buddhist statues, shrines, scripture, and relics. Legend has it that a tooth and bone of Gautama Buddha is preserved in a shrine within the temple complex. Moreover, there is a stone pillar with Mon language carvings dedicated by the Pagan ruler Kyansittha. Construction of the pagoda began in the mid-11th century during the reign of Pagan Emperor Anawrahta. According to a popular belief, Anawrahta sent a white elephant with a bone relic of Gautama Buddha to wander freely. It was also mounted with the royal declaration that the place where the elephant halted would be selected as the site for setting up the pagoda. The Shwezigon Pagoda was finally erected on a dune, where the elephant stopped.

While the construction of the lower terraces took place during Anawrahta’s rule, the remaining structure was completed in 1086 by his son Kyansittha. The pagoda contains four statues of standing Buddha that are thought to be built during the same period. Over the years, natural calamities such as earthquakes have caused considerable damages to the structure, necessitating occasional restoration works. After the 1975 earthquakes, the pagoda was supported by a covering of 30,000 copper plates.

The Shwezigon Pagoda is built in Mon architectural style featuring staircases, richly ornamented spires and gates, and a large golden finial beautifully designed with gems. Some treasured relics including Buddha’s frontal bone, collarbone, and a tooth are thought to be preserved in the Shwezigon Pagoda. To honor these relics, shrines of the 37 Great Nats have been constructed. The pagoda has five square terraces, which rise in a pyramidal form and are covered on the top with chatris or umbrellas.

The interiors can be accessed from all the cardinal directions through steps that help the devotees to go up and participate in religious ceremonies. The terraces have instructive tablets, which give an account of the life events of Buddha. Even though the temple has four entrances, only the western and southern ones can be used today. At the edges of the terraces, there are small replicas of the pagoda, fitted with gilded vases or kalashas. 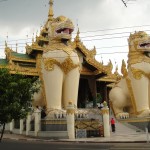 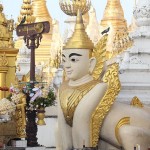 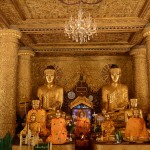 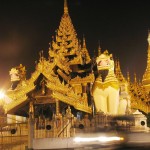 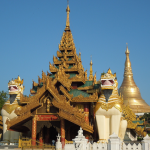 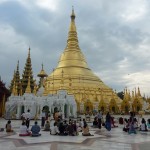 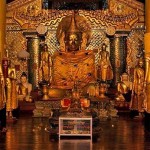 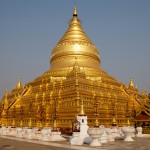 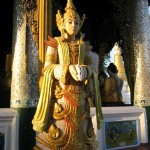 The entrance is guarded by two huge leogryph statues, called the chinthes. A shrine in the temple complex contains not just the statue of 37 Nats but also a wooden figure of Thagyamin. Moreover, there are four statues of Buddha (Kakusandha, Konagamana, Kassapa, and Gautama Buddha) in a standing posture, each measuring 12-13 feet in height.