The temple city of Bagan located in central Myanmar is one of the greatest archeological sites in Southeast Asia. Notable for their size and numbers, the scores of ancient temples and pagodas seem to overwhelm the entire Bagan plains. In the mid-19th century, the city became the central power base of the Pagan Dynasty under the rule of Emperor Anawratha, who merged all the provinces that would later form the modern-day Myanmar. According to historians and scholars, the ancient city of Bagan was established in the 9th century by the Burmans (Mranma). The settlement flourished and grew in power, influence, and nobility. In 1044, the city became the cultural, political, and economic capital of Pagan and remained so for over 250 years. More than 10,000 pagoda, monasteries, and temples were built, of which 2,200 monuments still survive today.

During its heyday, the city became a center for secular and religious studies, attracting students and monks from faraway places. Due to the successive invasions by the Mongols, the Pagan Kingdom fell in 1287. Bagan was officially stopped from functioning as the capital city in December 1297. It was diminished to a little town, and never managed to regain its importance and superiority. It survived as a destination for the pilgrims all through the imperial period.

This Buddhist temple was constructed in 1105 AD by the Pagan ruler Kyanzittha. While its impressive architecture is a fusion of Indian and Mon style, it has a cruciform layout with terraces that lead to the small pagoda.

One of the most notable sites in Bagan, the Bupaya Pagoda was built in c. 850 by King Pyusawhti. The original structure, constructed in Pyu style, was completely devastated by the earthquake in 1975. However, it was completely reconstructed a few years later.

This Buddhist temple is located in the Pwasaw village to the east of Bagan. Built in 1196 by the Emperor Narapatisithu, the circular pagoda has three terraces featuring terra cotta tiles.

It is the largest temple in Bagan set up during 1167-1170 by King Narathu. The interior of the temple is bricked up, making the outer corridors and the four porches the only accessible places in the temple.

Constructed during 1211-1231 by King Htilominlo, the 46 m high Buddhist temple is famous for its detailed plaster moldings. It suffered damages in the earthquake of 1975, but was subsequently repaired.

This 13th-century temple was built during the rule of Htilominlo, and it resembles the Mahabodhi Temple in Bihar, India. Its massive pyramidal tower has several cavities within the wall consisting of more than 450 representations of Buddha.

The 11th-century Buddhist zedi was built on the riverbank of Ayeyarwaddy during the rule of Anawratha. It has an exact copy of a tooth relic of Buddha. 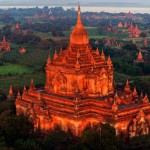 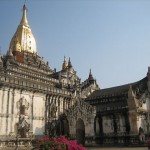 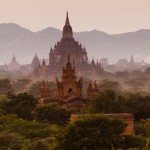 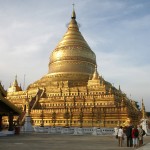 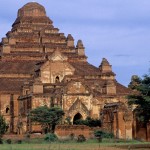 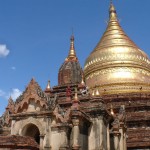 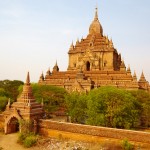 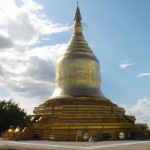 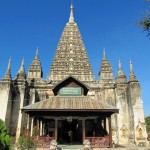 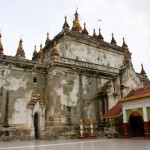 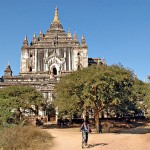 Located in Myinkaba near Bagan, the Manuha temple was constructed in 1067 by the captive Mon ruler Manuha. The temple consists of a statue of Buddha attaining Nirvana and three statues of seated Buddha.

The famous Thatbyinnyu Temple is located adjacent to the Ananda Temple. It was constructed during the mid-12th century by King Alaungsithu. Standing at a height of 61 m, Thatbyinnyu is the tallest temple in Bagan.