Angkor Thom, meaning the Great City, was the most long-lasting and the last capital of the Khmer Kingdom. Spread over 9 square kilometers, this capital city is situated in present-day Cambodia. This ancient city is home to many historical monuments including those that were founded by Jayavarman as well as his heirs.

The city’s architecture is in Bayon style that is reflected in its sheer size, the extensive use of laterite, the face-towers at the entrances, as well as the huge figures representing the naga (an entity or deity with the appearance of a snake) at the towers. The foundation of the site dates back to the 12th century prior to which Jayavarman VII defeated the Cham warriors. Soon after, Angkor Thom became the center of a huge building program. At the site, some notable temples from earlier eras were already present, including the Phimeanakas and the Baphuon temple.

The King started fortifying the city by constructing 8m high walls, which in turn was surrounded by a moat. He then constructed the state temple, called the Bayon, as well as the Royal Palace to the north. Most of the Palace is in ruins today, except for the Leper King Terrace and the Elephant Terrace. It is believed that the city was inhabited by about 100,000 people.

The King of Ayutthaya Kingdom, Borommarachathirat II, invaded the city and forced the Khmers to shift their capital southeast. A few years later, the city was abandoned.

Being surrounded by high laterite walls that are topped with a parapet, the city can be accessed through five entrance gates situated at the cardinal directions. The roads at these gates are the means of access to the Bayon temple. The South Gate is 1.7 km north to the entrance of Angkor Wat while the Victory Gate lies just 500 m north to the East Gate. These gopura gates, constructed during the 12th-13th centuries, have a central tower with two smaller towers at the side.

The 23 m high towers at the gates, like that of the Bayon, have very large faces facing all the cardinal directions. It is believed that these faces embody the bodhisattva Avalokiteshvara, the king himself, or the protectors of the cardinal points of the kingdom.

Spanning the moat near every tower are the causeways with stone figures of “Asuras” and “Devas” holding a huge naga in the posture of tug-of-war. This scene appears to be related to the “Churning of the Ocean of Milk,” a popular episode of Hindu and Cambodian mythology.

A Prasat Chrung is a sandstone-shrine located at all the four corners of Angkor Thom. These cruciform shrines having a central tower are dedicated to Avalokiteshvara. 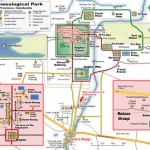 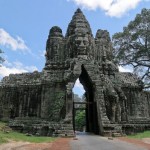 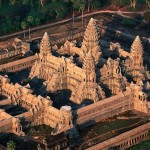 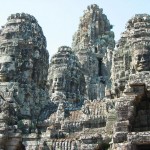 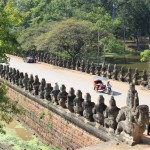 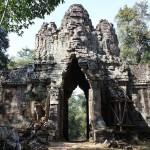 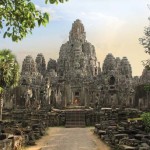 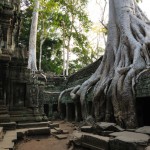 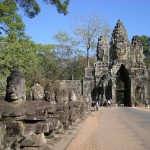 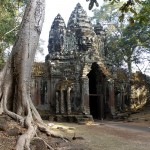 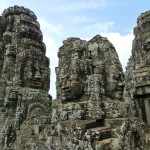 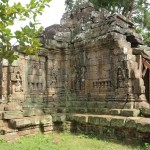 The Angkor ruins mostly constitute bas-reliefs representing gods, goddesses, and other entities from classical poems and mythological stories of Hinduism and Buddhism. These images also depict animals like fish, snakes, monkeys, and elephants, as well as serpent-like creatures from Chinese art.

One response to “Angkor Thom Historical Facts and Pictures”