Aachen Cathedral, also known as Cathedral of Aix-la-Chapelle or the Kaiserdom of Aachen (German: Aachener Dom), is a Roman Catholic Church in Western Germany. A building of great historical significance, it is the oldest church in northern Europe. It was built by Emperor Charlemagne and was an important site for imperial coronation and pilgrimage for centuries. The Palatine Chapel, constructed by Odo of Metz, houses the burial site of Charlemagne, who was laid to rest in 814. The Cathedral of Aachen was damaged by the Vikings in 881 and was restored in 983. In 1165, the chapel earned the reputation as a pilgrimage after Frederick Barbarossa canonized Charlemagne.

The Octagon at the middle of the cathedral was erected as a chapel palace, and the architectural design was drawn from other contemporary Byzantine architectures. The upper circuit of the chapel houses the high altar and the imperial throne.

The westwork of the cathedral is bordered by two stair-towers. It is a two story building with a porch at the west end. Bronze leaves are attached to the porch. There are many bronze structures, which include a bronze pine cone having 129 perforated scales measuring 91 cm in height.

The cathedral houses the throne of Charlemagne. The authentic throne was one of Carolingian one which came from the spolia of Church of the Holy Sepulchre in Jerusalem. Thirty-one German kings ascended the throne between 936 and 1531.

The choir of the cathedral houses the shrine of St. Mary, which dates from 1220- 1239. The shrine comprises of the four great Aachen relics; the St. Mary’s cloak, Christ’s loincloth, the clothes in which Christ was draped, the cloth in which St. John’s the Baptist was beheaded.

A wheel chandelier made up of eight curved faces hangs on a long chain from the vault of the dome about four meters above the ground known as the Barbarossa Chandelier. The artifact was a donation of Emperor Frederick Barbarossa and his wife, Beatrice.

A pulpit was erected as an Ambon between 1002 and 1014 during the reign of Henry II. The pulpit, one of the most remarkable artifacts of Ottonian Renaissance, is still used during ceremonies. 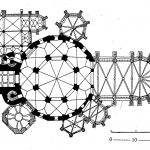 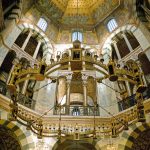 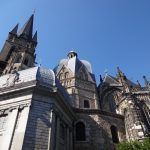 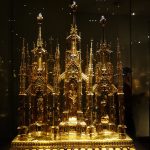 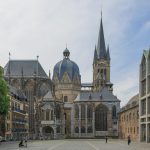 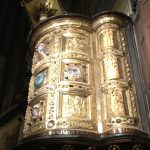 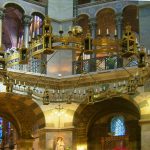 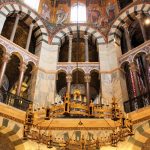 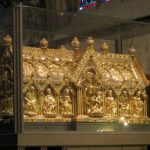 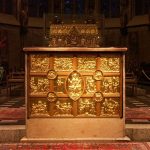 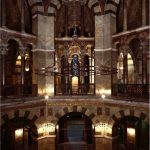 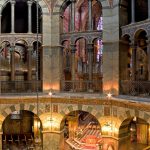 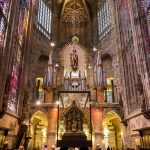 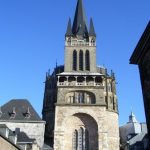 Pala d’Oro is a golden altarpiece that was designed around 1020 in Fulda. The altar is composed of seventeen gold panels with reliefs. Christ is enthroned in the middle surrounded by Mary and Archangel Michael.

The Aachen cathedral treasury is one of the most significant pastoral treasuries in northern Europe. It includes many important relics such as the Bust of Charlemagne, Cross of Lothair, and the Persephone sarcophagus. The relics are displayed to the pilgrims every seven years.