The Thracian Tomb of Kazanlak is a tholos tomb with an arched roof, situated in the vicinity of the town of Kazanlak in Central Bulgaria. It is an artistic masterpiece of the Thracian culture and dates back to the Hellenistic period, during the 4th century BC. The tomb is located near the Thracian capital city of Seuthopolis and is part of a large Thracian necropolis. It consists of a narrow corridor, a rectangular anteroom, a circular burial chamber, and a bell-shaped dome. A wine jug and horse bones were found in the anteroom whereas an amphora, a funeral crown, clay rosette, parts of golden jewelry and pieces of Thracian ceramics were found in the dome premise. The edifice is renowned for its mural in the corridor, burial chamber and dome premise signifying Thracian burial rituals and culture.

The frescos are memorable for the magnificent horses and for an act of farewell in which a seated couple hold each other’s wrists in an emotional manner. The wall paintings depict a fight scene between two enemy troops – scenes signifying a historical event related to the life of Thracian rulers most probably buried in the tomb. There was also a mural which shows a prominent married couple being crowned with laurel wreaths – a symbol of heroization, very much popular during the Hellenistic era. 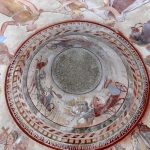 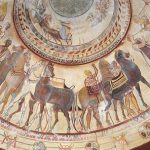 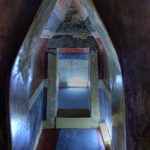 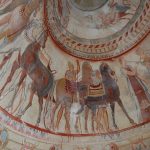 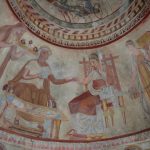 Thracian Tomb of Kazanlak Inside 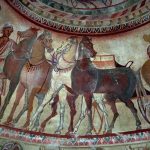 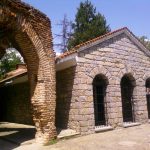 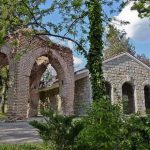 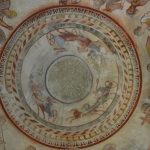 The paintings are considered Bulgaria’s best-preserved artistic splendors from the Hellenistic period. To safeguard the delicate paintings, the tomb is not open to the public. A replica of the tomb was built nearby.