Temple of the Tooth, also popular as Sri Dalada Maligawa is a famous Buddhist temple located in the city of Kandy, Sri Lanka. The temple lies in the royal palace complex of the former Kingdom of Kandy, which contains the sacred relic of the tooth of the Buddha. Over the years, the tooth relic played a role in local politics, as it is considered that the person who has the relic holds the governance of the country. The temple occupies a pride of place in the history of the city of Kandy. Daily worship takes place in the inner chamber of the temple conducted by Bhikkhus of the two chapters of Malwatte and Asgiriya. Temple Of The Tooth

After Gautama Buddha’s parinirvana, the tooth was preserved in Kalinga and smuggled to the island nation by Princess Hemamali and her husband, Prince Dantha following the orders of her father, King Guhasiva. After landing in Lankapattana in the island during the rule of Sirimeghavanna of Anuradhapura (301-328), they handed over the relic. The relic was enshrined in Meghagiri Vihara in Anuradhapura (present day Isurumuniya). It was the responsibility of the monarch to protect the relic and eventually over time the custodianship of the relic was associated with the right to rule. This was the reason for constructing the tooth relic temples by the reigning monarchs in the vicinity of their royal residences. The relic was kept in Niyamgampaya Vihara during the period of the Kingdom of Gampola.

The relic was kept hidden in a grinding stone in Delgamuwa Vihara, Ratnapura during the reign of Dharmapala of Kotte. Hiripitiye Diyawadana Rala and Devanagala Rathnalankara Thera brought it to Kandy. During the Portuguese invasion of Kandy in 1603, the relic was carried to Meda Mahanuwara in Dumbara. It was recovered during the reign of Rajasinha II. The present temple was built by Vira Narendra Sinha. The octagonal Patthirippuwa build by the famous architect of Kandy Devandra Mulacharin and moat was added during the rule of Sri Vikrama Rajasinha. The Patthirippuwa was initially used by the Kings for recreation and later offered to the tooth relic. Currently, it is a library.

The temple was attacked twice in 1998 by the militant outfit Liberation Tigers of Tamil Eelam and in 1989 by the Janatha Vimukthi Peramuna.

The brick wall running along the moat, known as the water waves wall, has holes in it to light coconut oil lamps. The main entrance gate located over the moat is known as Mahawahalkada. At the base of the main gate lies a Sandakada pahana (moonstone) carved in Kandyan architectural style. The either side of the entrance has elephants depicted in stone. The front of the main shrine houses Hewisi drummers’ chamber. The main shrine comprises two storeys – the lower floor and the upper floor. The doors of the upper floor are carved in ivory. The chamber which contains the tooth relic is known as the “Handun kunama”. Other significant features are the golden canopy built in 1987 over the main shrine and the golden fence encompassing the main shrine. The tooth relic is enclosed in seven golden caskets engraved with precious gemstones. The caskets are in the shape of a stupa.

It lies to the north of the temple. As per historical description, Vikramabahu III of Gampola (1356-1374) and Sena Sammatha Wickramabahu of Kandy (1469-1511) built royal palaces on the site. Vimaladharmasuriya I of Kandy (1592 – 1603) also occupied the palace and improved the existing structures.

At present, it now functions as an archaeological museum. 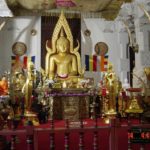 Inside Temple of the Tooth 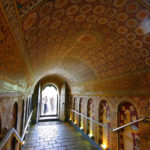 Interior of Temple of Tooth 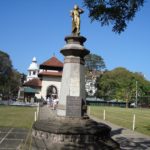 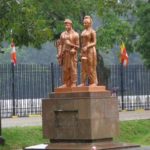 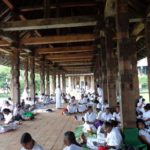 Temple of the Tooth Audience Hall Inside 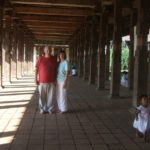 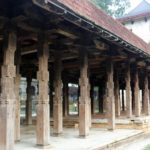 Temple of the Tooth Audience Hall 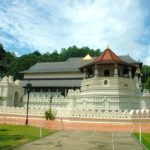 Temple of the Tooth Images 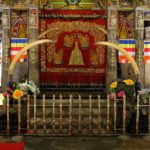 Temple of the Tooth Inside View 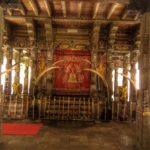 Temple of the Tooth Inside 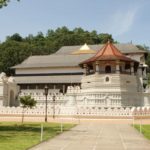 Temple of the Tooth Pictures 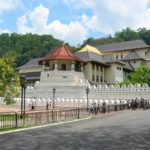 Temple of the Tooth Royal Palace 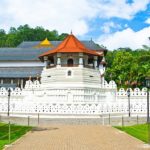 Temple Of The Tooth

It is the place where the Kings of Kandy held their court. It was built in 1783 by Sri Rajadhi Rajasinha of Kandy. The carvings of the wooden pillars supporting the wooden roof reflect the wood carving of the Kandyan period. The Kandyan Convention was drawn up and read out to the people in the Audience Hall, and it was also the venue of the conference that was held in 1815. At present, it is used for state ceremonies and protected under the department of archeology.

The statues of Madduma Bandara, as well as the statue of Princess Hemamali and Prince Dantha, relocated on the site of the temple. The skull of Keppetipola Disawe is also located here.