Jade Buddha Temple is a famous and much revered Buddhist temple located in the city of Shanghai, China. The present temple was influenced by Pure Land and Chan traditions of Mahayana Buddhism. The temple houses two jade Buddha statues – one, a 1.95 m tall, sitting Buddha and the other a smaller reclining Buddha depicting Buddha’s death. At present, the temple also contains a large reclining Buddha made of marble donated from Singapore. During the reign of Qing Dynasty, a Buddhist monk named Huigen visited Tibet on a pilgrimage. He went to Burma after leaving Tibet. In Burma, an overseas Chinese resident named Chen Jun-Pu donated five jade Buddha statues to Huigen who brought two of the statues back to Shanghai. Huigen had a temple built in 1882 with donated funds to house the statues. The temple was occupied during the 1911 revolution, and the statues were shifted.

Later, a Buddhist monk by the name of Kechen took the initiative to construct a new temple on a land donated by a senior official in the Qing imperial court named Sheng Xuanhuai. It took ten years to construct the temple which lasted from 1918-1928. Many ceremonies were held in the temple after its construction including a ceremony organized by the Shanghai Buddhist Association to mark the 2500th anniversary of the Buddha’s enlightenment. Also, lecture sessions, meditation and other aspects of temple life were held in the temple. The Shanghai Institute of Buddhism was founded at the temple in 1983 by the Shanghai Buddhist Association.

Layout of the Temple

This chamber is located in front of the temple, housing the statues of Maitreya, Skanda, and the Four Heavenly Kings, who signifies favorable circumstance.

This great chamber houses many statues including “Three Golden Buddhas” where the central statue is of the Buddha with Amitabha on the left and Bhaisajyaguru on the right. “Gods of the Twenty Heavens,” covered in gold lies in the eastern and western sides of the Hall. The hall contains 18 unique golden arhats standing in two groups of nine. The northern entrance of the room includes a large standing statue of Guanyin flanked by Sudhana and sculptures depicting the 53 teachers of his life above.

This chamber lies on the second floor in the northern part of the temple. The antechamber contains some additional Buddhist sculptures. 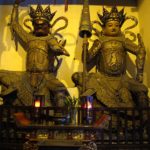 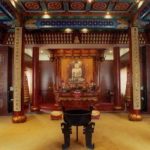 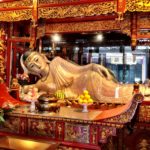 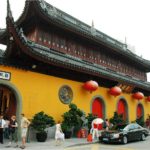 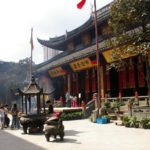 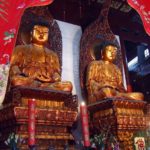 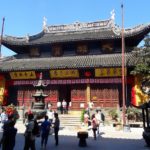 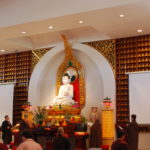 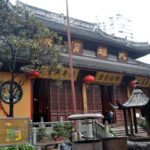 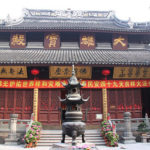 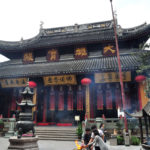 The temple has a visitor services office next to the southern entrance and also contains a Buddhist library on the premises.