Great Sphinx of Giza, also known as Sphinx of Giza or Sphinx, is the oldest and largest known statue in the world built from a single piece of limestone. Located on the Giza plateau on the west bank of the Nile river in Giza, Egypt, it profoundly reflects the art and culture of ancient Egypt. The statue takes the form of a reclining lion with a human head. There is a great deal of controversy regarding the exact date of the construction of the Sphinx and its creator as well as its purpose. The mystery surrounding its creation has puzzled numerous researchers and Egyptologists for ages, and many theories have been advocated by many scholars. However, it is commonly believed that it was built by the natives of Egypt of the Old Kingdom during the rule of the Pharaoh Khafra (2558–2532 BC). But, again, geological and archaeological research suggested that the Sphinx was far older.

It is unknown by what name the creators of the statue called it, as the name Great Sphinx is not mentioned in any known inscription of the Old Kingdom. These questions have evolved into the popular “Riddle of the Sphinx.” It was around 2000 years after its commonly accepted date of creation, during the classical era that the statue was referred to as Sphinx.

The statue facing west to east measures 238 feet long, 66.3 feet high and 62.6 feet wide. The site comprises of the Sphinx, a causeway, Pyramid, Sphinx temple and other temples.

At some unknown date, the Giza Necropolis became abandoned, and the Sphinx became buried up to the shoulders in sand. The first attempt of excavation as per historical documents was undertaken by Thutmose IV dating back to 1400 BC. A second excavation may have been carried out by Ramesses II the Great (1279–1213 BC).

The first modern excavation was carried out under the supervision of Italian Captain Giovanni Battista Caviglia in 1817 AD in which the Sphinx’s chest was fully uncovered. During 1925 to 1936, the entire Sphinx was excavated in digging operations led by Émile Baraize. 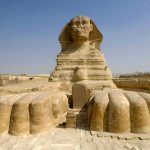 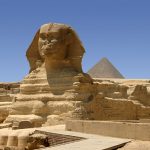 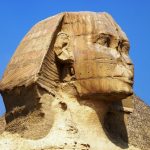 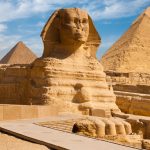 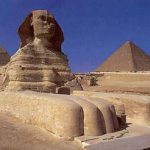 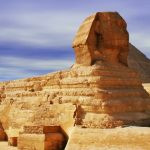 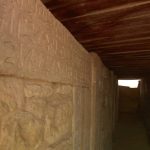 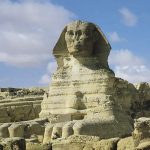 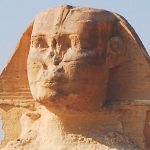 There a lot of stories regarding the missing nose and beard of the Sphinx. According to one such story, the nose was broken by a cannonball fired by Napoleon’s troops but, sketches of the Sphinx made in 1738 and published in 1757 reveal that the nose was missing before Napoleon’s birth. Some theories show that the Great Sphinx had a beard – several pieces of which were housed in the British Museum in London and the Cairo Museum.